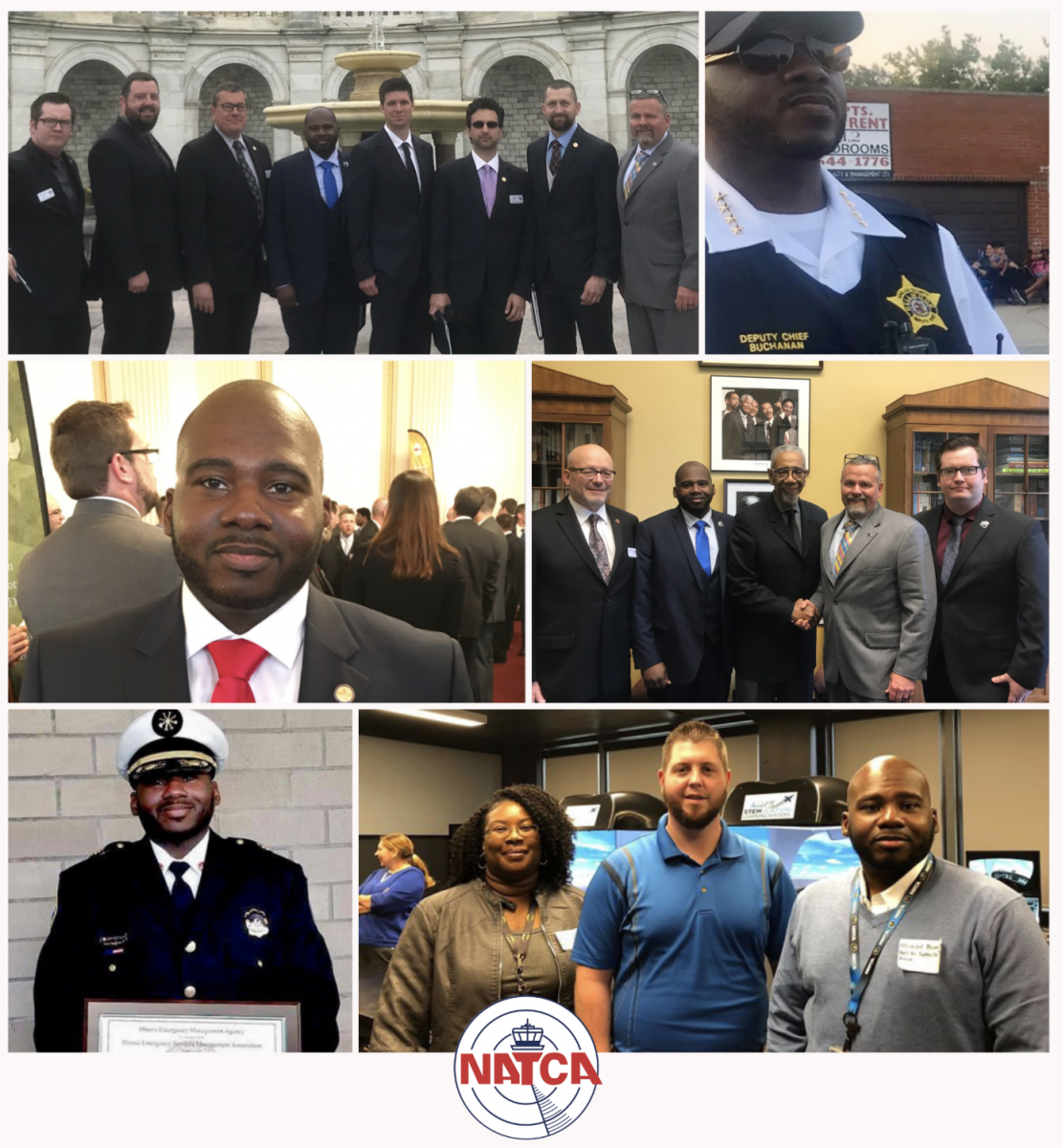 Michael J. Buchanan, a beloved NATCA brother, the FacRep and Legislative Rep at Aurora ATCT (ARR), a respected member of the esteemed “pink shirts” team of air traffic controllers at EAA AirVenture Oshkosh, and a highly decorated and experienced emergency management officer in his native Bellwood, Ill., passed away on July 29. He was 36.

He was a member of the National Black Coalition of Federal Aviation Employees (NBCFAE). He spent the last two years as FacRep at ARR, and one year as the facility’s Legislative Rep. He represented his facility and his Union at NATCA in Washington (NiW) last May, participating in several Congressional meetings including one with Illinois Senator and Democratic Whip Dick Durbin.

NATCA Great Lakes Regional Vice President Drew MacQueen noted that loss is never easy, but “it’s especially hard when it’s someone you know and work with.”

“MJ was a dedicated, hardworking FacRep and tremendous NATCAvist,” MacQueen said. “His hard work, dedication, and leadership without question impacted and improved the lives and working conditions of everyone he worked with at ARR.

“For those of us who had the pleasure of knowing MJ, we knew him to be extremely funny, very personable and an overall great person. I, without question, along with many others, will certainly miss MJ.”

Buchanan began his Federal Aviation Administration career in November 2009 at Chicago-O’Hare ATCT (ORD) and worked there until July 2010. He then spent the next three years working at ARR before transferring to Andrews Air Force Base ATCT (ADW) where he spent one year, until June 2014. He then returned home to Bellwood, and ARR.

Buchanan served as Bellwood Department of Homeland Security and Emergency Management Deputy Chief. He had been a member of the department for eight years.

The Department posted this message to its Facebook page in mourning the loss of Buchanan:

“Deputy Chief Buchanan was an advocate of the concept of Homeland Security and Emergency Management. He knew the discipline of Homeland Security and Emergency Management provides a lens through which to view all hazards, assess all threats, and work to prevent, protect, mitigate, respond and recover. Expanding to this all-hazards approach was important to the deputy chief, and he worked tirelessly to make our agency a place where this discipline could be fulfilled.

“A Bellwood native, Deputy Chief Buchanan devoted many hours to his community, always thinking of ways to better serve the village. A former fireman and paramedic, he worked full-time as an air-traffic controller and represented its union. Yet he made a point of acquiring additional training, encouraged others to do the same, and sought to develop himself and our officers to the fullest extent. He was a mentor, an example, a motivator who knew how to inspire others. When asked questions, he gave full and honest answers. He listened to us, advised us, encouraged us, and mourned with us. He never failed to notice and congratulate our successes. Most of all, he was truly our brother. May he rest in peace.”

Buchanan made a name for himself in the Great Lakes Region as a dedicated NATCA legislative activist.

“Michael Buchanan has been involved in NATCA’s legislative efforts in Illinois for many years,” said Chicago Center (ZAU) FacRep and Illinois State Legislative Coordinator Toby Hauck. “He has been involved in helping educate members of Congress and their staff about air traffic operations, always articulating the importance of community/regional airports to the National Airspace System. “Michael believed in NATCA’s efforts moving legislation to protect both its members and the system as a whole. My condolences and prayers extend to his co-workers and family for their loss.”

Added Minneapolis Center (ZMP) FacRep Tony Walsh: “He educated himself to the best of his ability, taking advantage of NATCA training. He was a willing NATCAvist that stepped into whatever role or need came up at ARR.”

After attending NiW in May, Buchanan posted this update on his Facebook page (along with the photo, at bottom):

“It was a great honor to sit in the office of Senate Minority Whip, Senator Dick Durbin. Senator Durbin is a champion of #NATCA and a tremendous support to labor. Thank you to Congressman Dan Lipinski for allowing us the unique experience of entering the Capitol floor. These Illinois representatives are in the fight with us and great friends of #NATCA.”