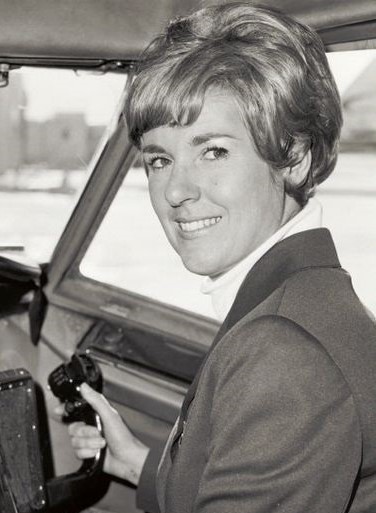 The aviation community was saddened with the passing earlier this month of Emily Hanrahan Howell Warner, the first woman hired as a pilot by a U.S. commercial airline and the first female commercial captain. She was 80.

To NATCA member Jamie Sanders (Vice President at Denver Centennial ATCT, APA), Warner was more than just a pioneer, mentor, and inspiration. She was her aunt.

“My Aunt Emily paved the way for many of us female aviators,” said Sanders, who before starting her air traffic controller career in 2012, was a pilot for Allegiant Air and Great Lakes Airlines. “I started flying when I was 15 years old, having no clue that being a female pilot was not the norm. Every job I’ve had since then has been in aviation. I’ve made so many lifelong friends and have so many incredible memories, all because of my aunt and many others that fought so hard to get us to this point.”

Warner was the first woman member of the Air Line Pilots Association, International (ALPA), the largest pilots union in the world, and the leader of the first all-female commercial flight crew. She is an inducted member of the National Aviation Hall of Fame in Dayton, Ohio, the Women in Aviation International Pioneer Hall of Fame, and the National Women’s Hall of Fame. She also is included in the Smithsonian National Air and Space Museum, where her first uniform is on display.

After graduating from high school, Warner took a trip on a Frontier Airlines DC-3 from Gunnison, Colo., to Denver. She knew right then that she wanted to be a pilot and started flying lessons the next week.

She made her first solo flight in 1958 and later worked as a full-time flight instructor. But it wasn’t until 1973 that she was able to join the pilot corps at Frontier. She later flew for Continental and United Parcel Service before working for the Federal Aviation Administration as an air carrier inspector.

“She was told no over and over again. Patiently and gracefully she’d come back with a smile on her face and wait for her chance,” Sanders said. “It was not only her amazing strength and persistence, but her positive attitude and demeanor that finally got her through that door to prove her skills at last. She was always very humble, positive, and had a grace about her.”