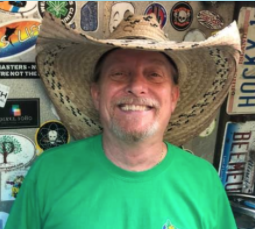 COVID-19 Claims Life of Beloved NATCA Brother Whose Kind Heart Touched Many in Tampa, Key West, and Beyond

Key West, Fla., Federal Contract Tower (EYW) FacRep Michael King passed away from complications related to COVID-19 on Tuesday, July 28, after being hospitalized for 18 days. King was a talented and dedicated air traffic controller and trainer whose career spanned 37 years. He was a friend to many who knew him as a caring, gentle soul and a good person to be around. He had just turned 66 years old on July 18.

“We are heartbroken at this news and extend our deepest sympathies to Mike’s family and his many Union brothers and sisters and friends who knew and loved him dearly,” NATCA President Paul Rinaldi said. “Mike’s death underscores the severity and the cruelty of this virus and its effects on our country, our professions, and our Union. Many of us have lost family members and friends to COVID-19 or know someone close to us who has. Today, we have now lost one of our own fellow Union members and it hits us hard. It reminds us how fragile life truly is, especially in these frightening and uncertain times.”

King was a U.S. Air Force veteran and friends say he was very proud of his military service. He began his Federal Aviation Administration controller career in 1983 at Tampa ATCT (TPA). He worked there for 27 years until his retirement in 2010. King was hired by Robinson Aviation, Inc. (RVA) in March 2011 to work at EYW. In April 2019, he assumed the role of NATCA FacRep. “He ran a great local,” said Southern Regional Vice President (RVP) Jim Marinitti . “Mike was a consummate professional and he didn’t need to have a title to project leadership.”

Stuart FCT (SUA) FacRep Rich Peiffer worked with King for 20 years at TPA. Peiffer said, “He has NATCA brothers and sisters all over RVA and in contract jobs for the FAA. He was the most giving person I’ve ever known. And he was one of the best air traffic control specialists I’ve ever worked with. Period.”

King’s personality suited his life in Key West perfectly. He expressed his love for the Florida Keys as a child and had just recently moved into a new condo. It is a terrible and sudden loss for those who knew him affectionately as the “Kingster” and “Kingfish.” News of his passing drew an outpouring of love on a social media tribute page full of sadness, and anger at COVID-19, but also fond remembrances of the special way in which King touched so many lives. Some of the descriptions from his friends:

“He was a bright light and all of us liked him.”

“He was always fun and was always present for anyone who needed an ear or a friend.”

“He was one of those good people that make this place (Key West) a community.”

“Mike was always helping others.”

Nashville ATCT (BNA) Vice President Ryan Warters said King was his first trainer when he was hired by the FAA and went to TPA in 2008. “He got me through the tower training and kind of made it a personal mission to get me done before he retired,” Warters said. “He was kind. He was smart. And most importantly, he was damn good at his job. He was one of the most genuine controllers I’ve ever had the privilege – no, the honor – to work with. ATC, NATCA, and the world lost a good man.”

Houston TRACON (I90) member Ryan McCain also started his career at TPA, in 2007, and immediately took a liking to King, who was helpful to the new trainees. “He was the perfect balance of tough, old school training, and big brother-like advice,” McCain said. “Over time, his behavior rubbed off on his peers and the place was a great facility to work at. He was a small guy, physically, but had a grand personality.”

McCain said King was also able to effectively diffuse any disagreements that sometimes occurred in the control room with a style of leadership that valued collaboration. That description was echoed by Alternate Southern RVP and FCT Representative Brad Burtner , who is also the FacRep at Pompano Beach FCT (PMP). Burtner said King did a great job as FacRep, making a focused effort to work with the manager for the betterment of the NATCA local. “He was a great guy,” Burtner said. “Mike will be missed.”