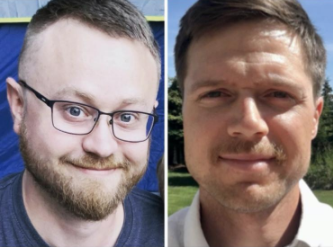 The weather conditions in Alaska are often poor, but they’re highly changeable. This can lead to situations where a pilot can encounter difficulty, especially if they’re not able to fly in instrument meteorological conditions (IMC). Alaskan Region air traffic controllers are keenly aware of this each time they plug in for a shift.

“I’ve seen situations where a pilot gets IMC for 30 seconds, they call up needing help, and they’re out of it in 15 to 20 seconds,” said Anchorage TRACON (A11) member John Newcomb (pictured, left), a second-generation controller who was a member of the 235th Air National Guard ATC Squadron before starting his Federal Aviation Administration career in 2014. “Other times, like this situation where it’s prolonged, you’re getting PIREPs from other airplanes and ground facilities, or from other pilots who are climbing out, descending in, or in level flight. But it’s not uncommon up here.”

On this particular Sunday morning, the VFR-rated pilot of a Cessna 172, N758XS, encountered IMC after departing Soldotna Airport (SXQ), headed to Birchwood Airport (BCV). Worse, the initial transmissions from the aircraft were garbled. Newcomb and his colleague from Anchorage Center (ZAN), Matthew Freidel (pictured, right), worked with assistance from their respective facility teams to aid the pilot, including vectors and recommended altitudes. Freidel earlier this month marked his nine-year anniversary in the FAA, all at ZAN. His love of aviation started at age 17 when he learned to fly gliders. He studied first commercial aviation and then air traffic control at the University of North Dakota.

In an area as vast as Alaska, controllers have lots of frequencies, but lots of limitations on their frequencies, such as line of sight. Mountains are everywhere.

“Garbled transmissions are common,” Freidel said. “But something about it felt strange and just compelled me to follow up on the transmission. I couldn’t really understand what was going on for a couple of transmissions.”

Soon, however, Freidel received help in the form of a climbing Peninsula Airways flight. The pilot could hear the broadcast on their end. It served to clarify for Freidel that it was indeed someone he should be talking to as opposed to a bleed-over from another frequency.

“At that point, it changed the whole dynamic of, ‘OK, what am I going to do?’ to ‘What do I need to figure out here?’” Freidel said.

As soon as N758XS appeared on radar, Freidel could finally see what was happening. “It looked like they were precariously heading toward mountainous terrain on the northeastern Kenai Peninsula,” he said. Freidel had a keen awareness of that airspace, having flown around it and been in Alaska for a while, so he knew the other direction was flat with short spruce trees comprising the terrain. Therefore, the impulse was to get the pilot of N758XS turned in that safer direction.

“I think the pilot did a fantastic job of flying her airplane in a moment of distress because she took the squawk code, she took all of the instructions, she kept the aircraft’s wings level, she climbed when I asked her to climb,” Freidel said.

Once the pilot was pointed in the right direction, the remainder of the event was fairly straightforward, both Freidel and Newcomb said.

Newcomb would soon have responsibility for the aircraft as it entered his airspace. He was plugged in, working to get a briefing started for the south radar position. Fellow A11 member Adam Herndon took the handoff first as Newcomb stood behind him and they discussed the situation. Herndon said he would give Newcomb the sector while he coordinated with ANC, Merrill Field (MRI), and Lake Hood Airport (LHD) to determine weather and visibility conditions.

“It was a team effort right there, and 8 XS did a great job, with wings level, climbed, did not descend,” said Newcomb. He advised the pilot she was close to ANC and “don’t worry about the Class Charlie. Just continue, and flight conditions should improve once you hit the shoreline.” Everything was coordinated by A11 so the pilot did not have to switch over to ANC.

ZAN member Chris Weldy said Freidel did a great job quickly diagnosing a pilot in distress, with initially barely readable transmissions. That set the story on a course to have a safe ending.

Listen to a podcast featuring Freidel and Newcomb.

Read a transcript of the podcast here.