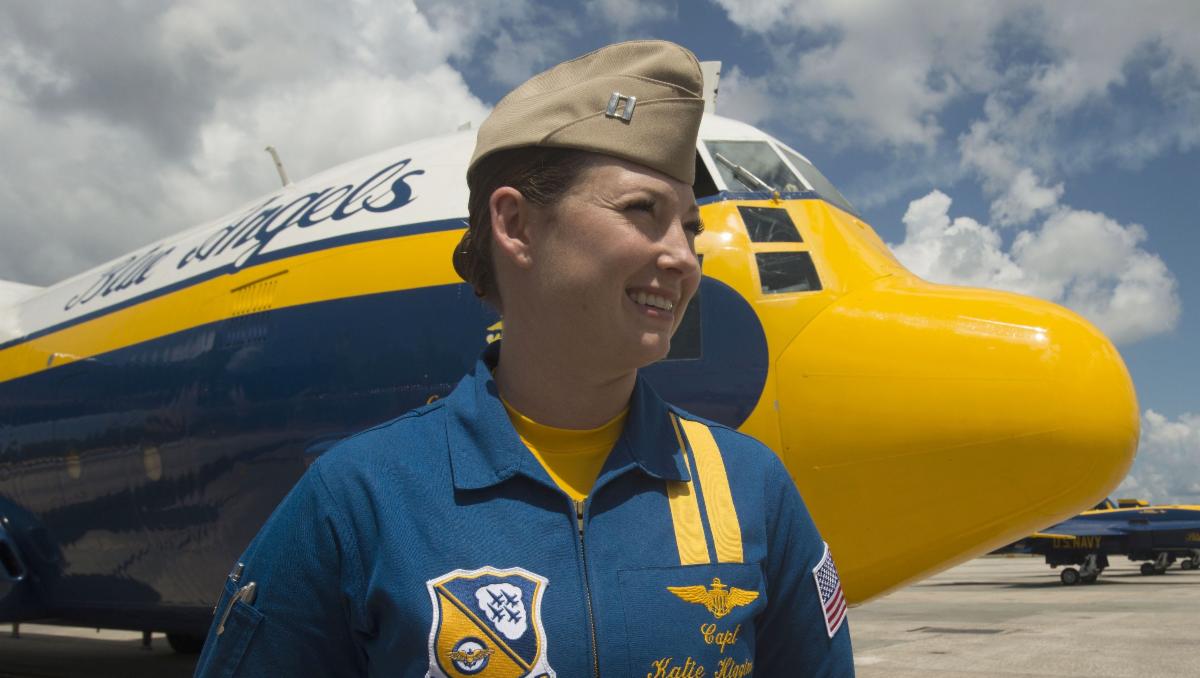 Celebrating Women in the Field of Aviation: Interview With First Female Blue Angels Pilot, Part 2 of 4

In honor of Women’s History Month, NATCA is presenting the second of a four-part conversation between two incredibly inspiring women in the world of aviation. NATCA’s own Jamie Sanders, an air traffic controller at Denver/Centennial ATCT (APA), who is also an experienced pilot, interviewed Major Katie Cook, a third-generation military aviator and the first female pilot in the storied history of the great Blue Angels team of the Navy.

In this episode, Cook talks extensively about her military experience including flying in locations around the globe. She was one of the few female aviators that flew in combat. She flew missions in mountainous Afghanistan and was based at Camp Bastion, a U.K.-operated airfield at 3,100 feet. Most of the missions were close air support aboard a C-130 with a Hellfire missile rack.

“It was extremely rewarding,” she said. “You join the military because you want to serve your country and you become an aviator particularly in the Marine Corps, to support the Marines on the ground. That’s what our entire structure of the Marine Corps is about.”

Cook was the only female pilot on the aircraft. She tells the story of one mission in particular where they came to the support of a group of Marines being fired upon. She could hear on the radio the explosions. They shot two Hellfire missiles to take out the enemy. Six months later, in a chance encounter in Europe, she met one of the Marines she helped save. “He said, ‘you guys saved our life,'” Cook said. “I have a face with the name and so it’s super rewarding.”

Cook described what that mission was like. “We’re taught to compartmentalize. At that moment, I was like, ‘I can’t fail. These people need the support,'” Cook said. “But in the back of your head, you’re like, ‘I’m about to shoot a missile at people; at a live person who’s probably not going to be alive after I do this.’ That’s kind of a heavy burden. They were shooting at Americans, so it was completely justified but it’s still a heavy burden that a lot of people don’t ever have to deal with.”

She also talks in this episode about applying and then being selected to join the Blue Angels on its Fat Albert aircraft, as well as her interactions with women of all ages and especially young girls that look up to her as an inspiring role model.

Listen to the full episode below on The NATCA Podcast, which is just over 20 minutes long. If you missed it, click here to listen to part one of the interview.