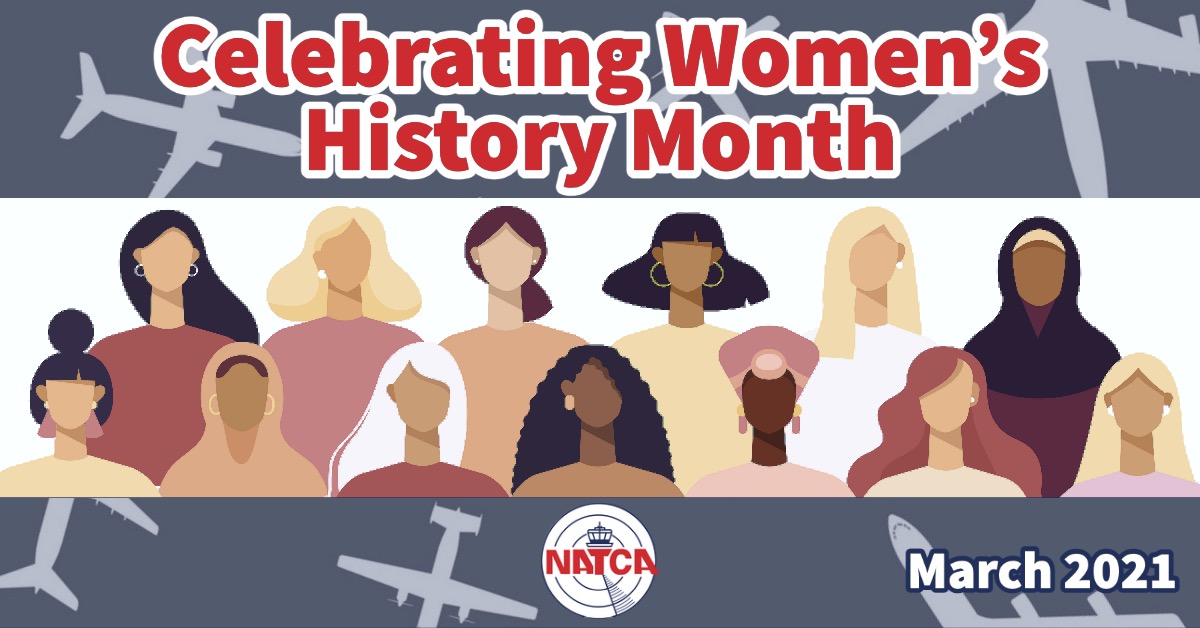 In celebration of Women’s History Month, many of NATCA’s female leaders from locals around the country shared their responses to a series of questions. We have been featuring their statements in recent publications. In this issue of the Insider, we share some selected responses to the final questions. To see all of the questions and answers, please visit the NATCA website.

If I can be honest, the fact that we have to have a month shows just how much work needs to be done to achieve equality and inclusivity. On a daily basis, women are not seen in the same vein as men. Sometimes, it appears that our voices are silenced due to old habits and stereotypes. I hope it allows more people to honor and appreciate women, and for women who see themselves as less than and misrepresented. When it comes to making decisions and having impacts on our community, workplace, and positions in aviation, we bring a perspective that mirrors the landscape of our society. We just need to catch up. – Kimberly Harris, Airports ADO Rep, Region X Airports Division (ARP); Engineer/Southwest Region (ESW)

This month is a time to remember women’s trailblazing efforts in the past and a time to inspire women to challenge the status quo, as they strive to become leaders in their daily lives and their workplace. – Corrie Conrad, FacRep, Portland, Ore., ATCT (PDX)

In life, it can become easy to take things for granted. Time passes and memories fade of the struggles that existed for yourself or for someone else. That is why Women’s History Month is so important, in order to reaffirm and remind everyone of all that women have overcome, especially in aviation. Each strong woman I meet in ATC inspires me and reminds me of the importance of the comradery we all share with one another. They push boundaries and challenge every roadblock in their way. This month is not only about honoring and showing appreciation to those women and the struggles they have overcome, but also the trailblazers that came before them in order to make it possible. Every day I am proud to be a woman in aviation and I feel the best way we can all show gratitude to all those amazing women past and present is to stand up, support one another and look forward to making the path a little brighter for the next generation. – Melissa Mowry, Secretary, Milwaukee/Mitchell ATCT (MKE)

Throughout my years in the Marine Corps and the FAA, I’ve often been the only or one of the very few women on crew. There’s often the stigma of having to work twice as hard and only being given half the credit. As my career progressed, I proved that my dedication and work ethic are what set me apart from everyone else, not my gender. Now as a FacRep, I encourage my peers to set any goal they are willing to work for and let the results of their work speak for itself. – Ariel Ortega, FacRep, Columbus, Ga., ATCT (CSG)

While other little girls were asking for Barbies, I was asking for model airplanes. I have always been the outlier. I am in a field that’s mostly men, in a profession considered to be rather conservative. I’ve got tattoos, colorful hair, and I’m not afraid to speak my mind. I have learned that being part of the Union has given me a voice I knew I always had, but didn’t know how to apply. Seeing other strong women thrive in our field has given me hope that change is possible, and it starts with me. – Shyan Lasater, Secretary/Treasurer, Palm Springs ATCT (PSP)

As an 18-year-old, I enlisted in the Navy in the advanced electronics program as a Cytological Technician – Maintenance, when it was a male-dominated field and began a long career of more than 40 years as an Electronics Technician and Information Technology Specialist. I showed that women not only could do this type of work but could excel at it and mentor others in the field. I also broke other norms, such as working independently and remotely since 2001, when I accepted an FAA HQ position but worked from Kansas City, Mo., leading to what would later become telework. – Pam Rusk, National IT Rep, Region X Financial Management (AFN); Engineer/Central Region (ECE)

I would like to meet the Chancellor of Germany, Angela Merkel. I would ask her how, knowing that she is one of the smartest people in the room, and mostly among men, that has affected her leadership and decision-making. I would also ask her how she feels about not only being elected as Chancellor of Germany, but also assuming the role of de facto leader of the European Union. – Amy Lark, FacRep, Potomac TRACON (PCT)

I would like to meet Mary Jackson, the Aerospace Engineer for NASA. I would ask her what her source of inspiration was to be able to endure the adversities she experienced at NASA. – Felicia Reeves, National ARP Rep, Region X Airports Division (ARP); Engineer/Southern Region (ESO)