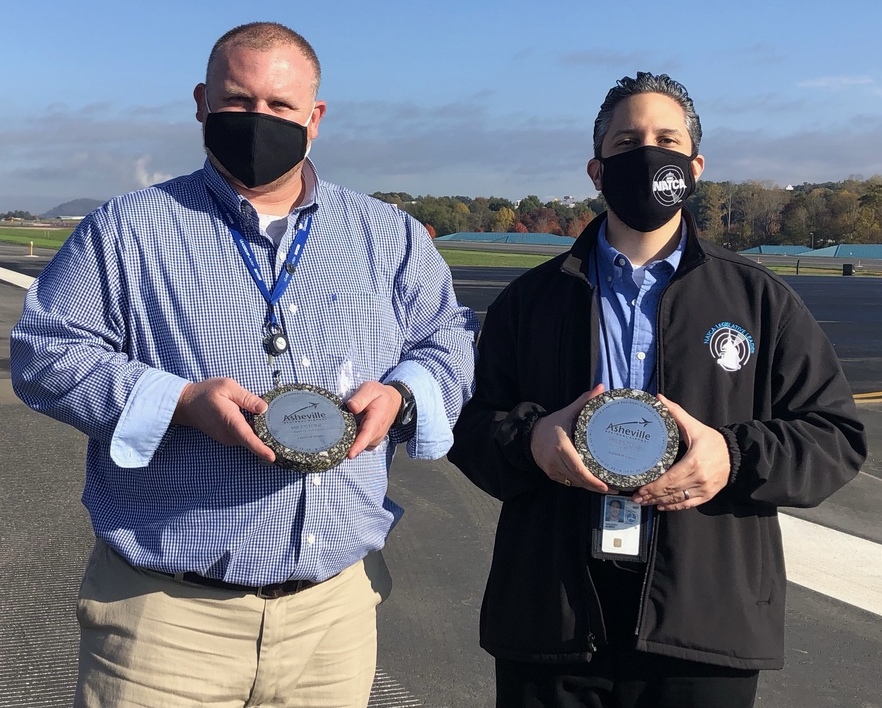 An eight-year-long effort of collaboration and hard work by NATCA members at Asheville ATCT (AVL) — all executed with exceptional safety and professionalism — culminated this year in the long-awaited completion of a complex runway construction project.

“I really want to underscore the incredible teamwork required to complete this project, and put a spotlight on the NATCA members of AVL for their dedicated hard work,” AVL FacRep Albert Navarro said. “It’s impossible to capture the full picture of the controller’s workload through this long project, but their contributions to its successful completion are the legacy of our professionalism as controllers, our collaboration as NATCA members, and our unwavering commitment to the safety of the National Airspace System, and we want to emphasize that.”

“This entire effort was a great display of collaboration between multiple lines of businesses within the Agency and industry stakeholders,” NATCA National Runway Safety Representative Bridget Singratanakul (Gee) said. “Safety works when people work together.”

The new 8,001-foot runway — the biggest construction project since the airport was opened in 1961 — began in 2013 for site preparation. Construction began in 2014. The goal was to modernize and expand the airport as its operations continue to swell year after year.

As a one-runway airport, there was no way to close the airfield in order to build a new runway. A temporary 7,001 ft parallel runway was constructed on the west side of the field to accommodate the majority of AVL regular traffic until the new runway was completed. Due to missed timelines, weather delays, and changes in contractors, the facility’s abnormal operations extended much longer than originally planned.

“The abnormal operations became our normal operations, challenging each of us to be creative while maintaining the safety and integrity of the users,” Navarro said. “At times we only had taxiways open on the approach and departure end. We often came to work not knowing what to expect due to daily or same-day changes.”

AVL has seen tremendous growth in the past several years, serving 1.6 million passengers in 2019. The airport’s six airlines brought in 43 percent more passengers in 2019, the largest annual jump in the airport’s history. That also made 2019 the seventh consecutive year of growth, airport officials announced in January 2020.

The biggest challenge for AVL was in October 2020, historically the facility’s busiest month of the year. Final phases of the construction project compounded operational complexity requiring enhanced teamwork and a ton of expert coordination.

“Bridget and her FAA counterpart Runway Safety Group Manager Giovanni DiPierro did a phenomenal job helping out our facility during the final phases, which were exceptionally challenging,” Navarro said.

The ribbon-cutting ceremony for the new runway was Oct. 23, 2020, and it officially opened Nov. 5, 2020 (pictured right: AVL Air Traffic Manager Darrin May and Navarro). The successful completion without compromise to safety, efficiency, or professionalism involved many team members over the course of the project, but would have been impossible without the exceptional work by members at AVL.

Great job, AVL members, and congratulations on the completion of this colossal endeavor!