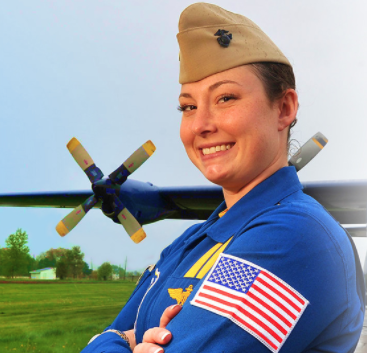 Cook says the three tips she has for successful people, either leaders or individual contributors, are: motivation that’s bigger than yourself, minutiae (attention to detail), and mistakes (having a good debriefing to learn from a mistake).

Sanders asked Cook, a leader both in and out of the cockpit, to identify the most important traits of a leader.
“The bottom line is you need to put subordinates first,” Cook said. “In the Marine Corps, we say, ‘leaders eat last.’ Your focus needs to be on them, their career development, and getting them the support that they need. Not completely ignoring your career development. But if you are a leader, that’s your job, developing them.”

Cook added a second key part: “If you fish for somebody, you’ll feed them for a day. If you teach somebody to fish, you’ll feed them for a lifetime. Part of being a leader is to cultivate leadership aspects in other people. When someone can make decisions on their own and handle a situation without elevating it to you, that’s when you know they’re on their own … and you’re doing your job as a leader.”

Watch Part 4 of their conversation below:

Review the First Three Parts of This Series

In case you missed the first three parts of this interview, on The NATCA Podcast:
Part 1 | Part 2 | Part 3