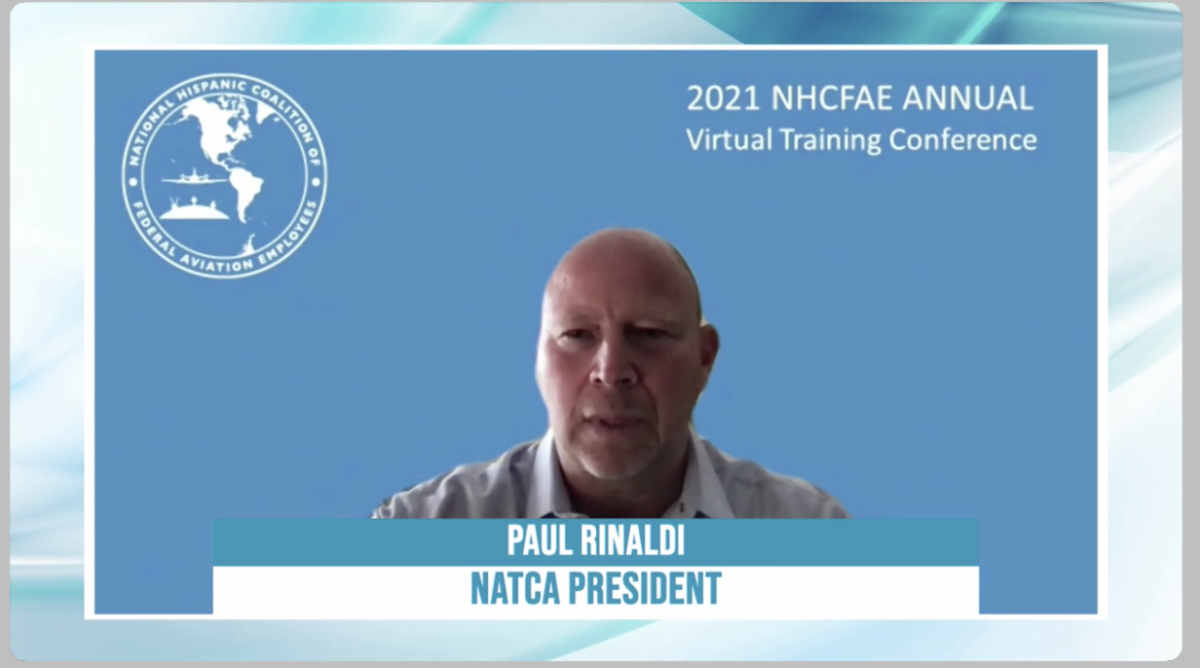 The National Hispanic Coalition of Federal Aviation Employees (NHCFAE) recently held its annual training conference. NATCA President Paul Rinaldi was a speaker on the Labor Management panel, highlighting the pandemic and the workforce, ideal staffing in air traffic control facilities, and how to cultivate a diverse, professional workforce.

Rinaldi discussed ongoing concerns for members and lessons learned during the pandemic. He stressed the importance of the level three cleanings that have been implemented in facilities to clean in between crew changes. He noted the cleanings began and were made possible due to the ongoing collaboration between NATCA and the FAA, and how the routine has helped reduce the number of ATC-0 shutdowns.

Regarding staffing, panel members were asked, “if you could get staffing to your ideal levels, what would you want the FAA to do?” Rinaldi replied, “We want real-time, science-based modeling on what an air traffic controller shift looks like. We have a lot of people in training and the pandemic set us back. Our career is not conducive to social distancing, especially in training.” He stated that if the aviation system is going to be modernized, the FAA will need certified professional controllers (CPCs) to work on it. “We will need a steady pipeline of controllers coming through the FAA Academy at all times. We just need to know how many CPCs we should have in the aviation system, and the science behind it.”

In closing, Rinaldi and the panel members considered the importance of diversity in the workforce. “The more diverse input you have, the better results you have,” said Rinaldi. He talked about the creation of the Union Synergy Committee to focus on inclusion for NATCA members. He also praised NATCA Executive Vice President Trish Gilbert for work on several boards, fostering diversity for the future of aviation. Said Rinaldi, “The lack of diversity in our field is still a problem, but it’s a societal problem, and we have to get into the schools, work on the STEM programs, and educate kids on how exciting and rewarding aviation jobs can be.”