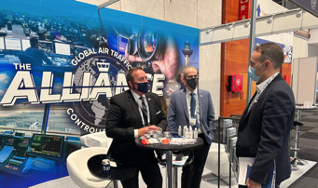 NATCA Advocates on the Global Stage at World ATM

Executive Vice President Andrew LeBovidge represented NATCA at the recent World ATM Congress in Madrid. This event was last held more than two years ago due to the pandemic. Its return signaled a key step in the global aviation recovery, and LeBovidge joined over 6,500 attendees at the eighth annual event that connects the world’s air traffic professionals, users, and industry.

“NATCA must remain part of both domestic and global discussions with industry, other labor unions, and regulators on issues that directly affect our members and our airspace,” LeBovidge said. “Our participation in events such as World ATM is critical to our ability to have a voice and to influence the future of our professions.”

World ATM Congress is hosted by the Air Traffic Control Association (ATCA) and the Civil Air Navigation Services Organization (CANSO). It was conceived as an event to bring together front-line users, technology developers, academics, and government officials. The resumption of an in-person conference, held under strict safety protocols, was seen as continuing a vitally important international discussion about how to maintain aviation as the lifeblood of the global economy and the world’s safest form of transportation.

This year’s event drew 172 exhibitors. One of them was the Global Air Traffic Controllers Alliance, which was created in 2018 and is made up of NATCA and the unions representing air traffic controllers in Australia, Canada, New Zealand, Spain, and the United Kingdom. The Alliance helps ensure NATCA and other member unions have a seat at every table where issues vital to our professions are being discussed, including remote towers, space-based ADS-B, drones, airspace redesign, and much more.

The members of the Alliance advocate for their represented members’ status and working conditions. The member unions work together to meet both individual and shared challenges, raise important safety issues to a global platform, and communicate with one another in a spirit of solidarity and unity.