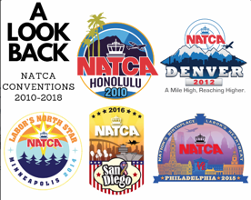 NATCA’s 18th Biennial Convention is approaching, Dec. 9-10. (Register here; reserve room here.) The NATCA Historical Committee (NHC) has completed the third and final installment in its series looking back at all of NATCA’s first 17 conventions and the importance they have had in shaping our Union. NATCA conventions bring together local delegates from across the United States to vote on and decide the direction of our Union. Conventions from 2010-2018 brought a new era to the Union; one where we were out of the White Book and growing and succeeding with fairly negotiated collective bargaining agreements covering each of our 15 FAA bargaining units.

The 13th Biennial Convention was held in Honolulu. This was Paul Rinaldi’s first convention as NATCA president. Delegates considered amendments that included how often future conventions might be held, and in what locations. They also debated seniority. A

Moving to 2012, the 14th Biennial Convention was in Denver, and NATCA aimed to reach higher in the “Mile High City.” Rinaldi spoke to the body about the need to avoid “pointing spears inwards,” instead turning them out, and standing in solidarity with each other. Past NATCA presidents came together with Rinaldi to talk about “Union together.” In the amendment booklet, we saw changes to the National Safety Committee (NSC), items regarding local business and write-in votes, and of course, seniority. The seniority conversation centered around those that lost seniority retroactively and how to fix that.

Two years later, the Union was in Minneapolis for the 15th Biennial Convention. The convention body honored the late House Transportation and Infrastructure Committee Chairman Jim Oberstar by renaming the Sentinel of Safety Award after him. Delegates also honored the late NATCA founding father, John Thornton, by creating an award in his name recognizing members who have made extraordinary contributions that have changed the course of the Union’s history. Two highlights of note were the changes to our dues structure and allowing our National Executive Board to sit at the table to discuss ATC reform possibilities. Other items that were discussed from the amendment booklet included the creation of the National Organizing Committee, discussion on moving convention to every three years, local meetings, and seniority.

The theme of the 16th Biennial Convention in San Diego in 2016 was “Salute to Service,” with lots of military pride. Seniority was again on the docket, including adding time for those that served. To show the history of our seniority policy, we took an in-depth look at how things started and how we got where we were in 2016. We also looked at the NSC’s structure, term limits for national officers, and electronic meetings.

The 17th Biennial Convention in 2018 took us to the “Nation’s Birthplace,” Philadelphia. Here, the Union did see a change to seniority, as our brothers and sisters in Region X are affected by jobs differently than air traffic controllers. This was the one change to seniority allowed under the Slate Book. We also discussed financial responsibility as it surrounded the conventions and raised the executive vice president’s salary to match the President. We also saw the NATCA Charitable Foundation (NCF) take a giant leap in its contributions, to which President Rinaldi set a challenge of making the NCF a $1 million charity.

Please enjoy this third collection of our Union’s documents and convention history.