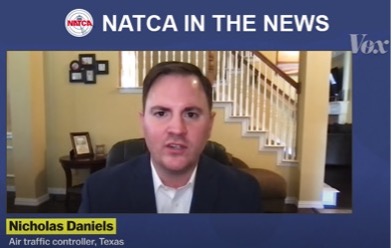 NSW RVP Daniels Tells Vox, ‘We Are Being Used as Pawns’ in the Game That Is a Government Shutdown

With yet another threat of a government shutdown looming as the Dec. 3 deadline approaches, Vox produced a new video detailing what a shutdown is and why it still can happen in the United States. Among the federal employees interviewed for the story was Southwest Regional Vice President Nick Daniels. He said that air traffic controllers are still required to show up for work in a shutdown but will not get paid until the shutdown ends. He also explained that controllers don’t just show up with a headset and do that job by themselves. They rely on assistance from other aviation safety professionals, who would be furloughed during a shutdown. Watch the video here.