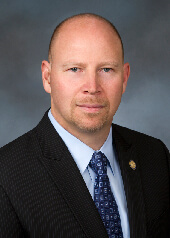 Paul Rinaldi has served as the sixth president of the National Air Traffic Controllers Association since October 2009. In March 2012 and March 2015, Rinaldi was re-elected by acclamation. In July 2018, Rinaldi won re-election to serve an unprecedented fourth, three-year term. Rinaldi is the first in NATCA’s history to serve more than two terms as president.

That is not, however, the first time Rinaldi and Executive Vice President Trish Gilbert have made history; though NATCA’s top two positions are elected separately, in 2009 they campaigned for their respective positions as a team, which had never been done.

Since taking office in 2009 Rinaldi and Gilbert have continued to work as a team, along with the NATCA National Executive Board, elevating NATCA to new levels of success. NATCA’s team is committed and focused on improving the working relationship between the Union, the Federal Aviation Administration and Department of Transportation. Efforts like the Air Traffic Safety Action Program (ATSAP), fatigue mitigation, Professional Standards, and Partnership For Safety are a result of the team’s focus on progress and safety. These processes have led to collaborative decisions on important issues involving airspace, procedures, technology, staffing and training while cementing NATCA’s leadership role and voice in the aviation industry.

Prior to being elected NATCA President, Rinaldi served three years as NATCA’s Executive Vice President, after 16 years as an air traffic controller at Washington-Dulles Tower (IAD). Rinaldi currently holds positions on the NextGen Advisory Committee (NAC), the FAA Management Advisory Council (MAC) and at the AFL-CIO 2013 Convention he was elected as a vice president of the labor federation’s Executive Council. He was re-elected to that position at the AFL-CIO 2017 Convention. Rinaldi also serves on the RTCA Policy Board and the Board of Advisors for the Eno Center for Transportation.

On Oct. 19, 2016, the Air Traffic Control Association (ATCA) presented Rinaldi with the prestigious Glen A. Gilbert Memorial Award, one of the most significant awards in aviation and ATCA’s highest honor. The Glen A. Gilbert Memorial Award is dedicated to the memory of one of the “Fathers of Air Traffic Control” and honors the lifelong achievements of an individual in the field of aviation.

On May 26, 2016, Rinaldi received the prestigious 2016 Humanitarian Award from the Sons of Italy Foundation (SIF) at its National Education & Leadership Awards (NELA) Gala in Washington, D.C. The SIF is the philanthropic arm of the Order Sons of Italy, the nation’s largest and oldest organization for people of Italian heritage.

Rinaldi is a native of Island Park, N.Y. He resides in Manassas, Va., with his wife, Debra. They have two sons, Anthony and Nicholas, and a daughter, Olivia.