Nicknamed “The World’s Most Famous Beach,” Daytona Beach, Fla., is not just a popular spring break destination. The city attracts over eight million tourists each year with events like the Daytona 500 and “Biketoberfest.” The city is also home to several flight schools, such as Embry-Riddle Aeronautical University (ERAU), and the headquarters of numerous corporations and associations, including NASCAR and the Grand American Road Racing Association.

With all these events and attractions, Daytona Beach (DAB) air traffic controllers work traffic around the clock. The DAB Tower and TRACON facility is the busiest Level 9 facility in the country. From January to March this year, DAB traffic increased by 10,000 operations compared to the same period last year.

DAB has 60 NATCA members, a diverse mix of young, new controllers and about a dozen controllers who are eligible to retire. There are two Staff Specialists, 41 Certified Professional Controllers (CPCs), and 17 trainees. Only four DAB staff members are non-NATCA members.

DAB covers airspace from just south of St. Augustine, Fla., to just north of Titusville, Fla., and the Space Coast. The facility has six satellite airports in its airspace, three of which are among the busiest in the country — Flagler, Ormond Beach, and New Smyrna. DAB also has DeLand, which is the busiest skydiving airport in the country. 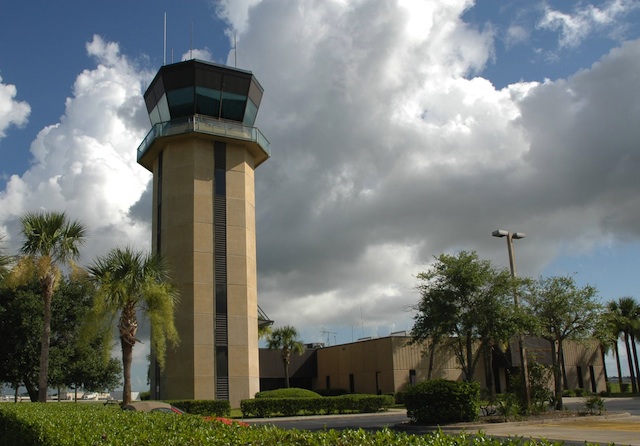 DAB has four flight schools on its property, but handles many other aircraft from the satellite airports’ flight schools as well as from the Orlando area. Much of the traffic at DAB is Visual Flight Rules (VFR) practice approaches and holding, which is a major part of DAB’s operation. The largest flight school is ERAU, with about 60 aircraft. According to DAB Facility Representative Mark Beaton, all of ERAU’s flights seem to depart and return at the same time and, when the traffic from the numerous other flight schools gets mixed in, it can get overwhelming.

“It’s always fun blending the Cessnas with about 50 air carrier and corporate flights, including NASCAR, with the much slower traffic,” said Beaton. “Our nickname is ‘SLO’Hare.’”

While difficult, the mix of traffic is not the biggest challenge for DAB controllers – it’s the language barrier. Controllers give clearances twice and sometimes three times. That’s because many, if not most, of the flight school students are learning English during their flight training.

During the twice-yearly NASCAR events at Daytona International Speedway, jet traffic increases dramatically since most drivers and teams have their own aircraft, along with sponsors and other corporate traffic. Beaton said the controllers enjoy working this traffic since they do not have the usual daily call signs.

Beaton said the DAB NATCA members are close, and often have off-site parties, with the biggest celebration on New Year’s Eve. He said the tradition is for the party to be at the house of the controller with the most property. Everyone brings food, sleeping bags, and four-wheelers.

“It’s a great place to work,” said Beaton. “And the word must be out by the number of calls and emails I get weekly from controllers all over desiring to come here.”