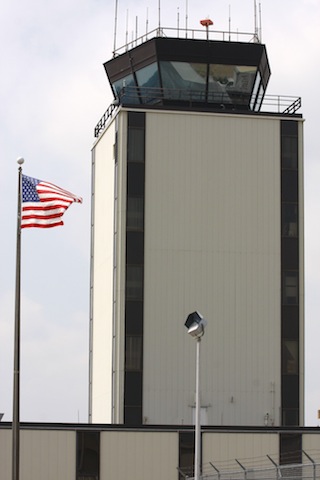 The heart of the midwestern United States lies at the intersection of Interstates 80 and 35, home to Des Moines Tower (DSM). This level seven, 24-hour, combined tower and TRACON facility opened in 1976, and still provides service to the busiest airspace in Iowa.

DSM is home to Iowa Air National Guard’s (IANG) 132nd Fighter Wing, flying the F16 Fighting Falcon. The IANG contributes a major portion of the incredible mix of traffic seen at DSM. From single engine props to regional jets and heavy cargo carriers, every type and size of plane shows up at DSM.

The wide range of weather in the Des Moines area creates a fun, yet challenging atmosphere for the DSM controllers, with summer thunderstorms and winter blizzards affecting the traffic flow on a minute-to-minute basis.

Special events are a common, if not constant, occurrence in the Des Moines area, keeping DSM controllers busy. Newton, Iowa, is home to the Iowa Speedway, which hosts five race weekends each summer, and makes for a busy airport before and after races.

Dedicated football fans travel to Ames for Iowa State Cyclones games, and several businesses have headquarters located in Ankeny. Also, the Iowa Caucuses brings many politicians and candidates to DSM every four years in preparation for the presidential election.