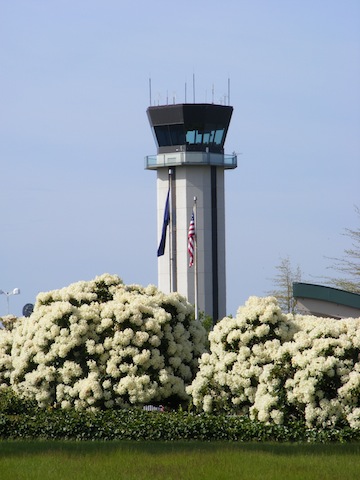 Known as “A Great City for the Arts and Outdoors,” the city of Eugene, Ore., is a paradise for NATCA members working at Eugene Tower (EUG) and TRACON.

Located seven miles northwest of the city, this Level 6 tower/TRACON operates from 6 a.m. to 11:30 p.m. The EUG TRACON is essentially two TRACONs combined. Air traffic controllers in the Eugene sectors work the airspace around EUG, and controllers in the Medford sector work the airspace around Rogue Valley International-Medford Airport (MFR), 105 miles south. The sectors use separate radars, and the airspaces don’t adjoin with one another. Seattle Center works the approximate 40 miles between the sectors.

At EUG, there are 16 Certified Professional Controllers (CPCs) and five developmentals, with two more arriving next month. At 99 percent membership, 22 of EUG’s bargaining unit members are NATCA members.

EUG NATCA members enjoy mild weather year-round. The summer seasons are usually warm and dry, while fall, winter, and spring seasons are generally rainy. In the winter, the Medford terrain combined with occasional fog and rain can sometimes make the sector a challenge.

EUG NATCA members have plenty to do living in a city that is noted for its natural beauty and outdoor recreational opportunities, including hunting, fishing, hiking, skiing, wakeboarding, bicycling, and running. Several members are avid Oregon sports fans and attend football, basketball, and baseball games. There are others who have acreage in the country, and enjoy the work associated with rural living. Eugene is also only an hour drive from the Oregon coast and the scenic Cascade Mountains, and only a short distance to world famous fishing rivers like McKenzie, Umpqua, Rogue, and Deschutes.

As a group, EUG NATCA members try to get together frequently. They recently had a ‘Reloaded Day’ at a local paintball course. Every summer, members get together for a barbecue at the home of a member who is also an award-winning home brewer. NATCA EUG members also always attend the annual KLCC Brewfest in February, the biggest off-air fundraiser for the local radio station. EUG NATCA members volunteer as food servers and proudly display a banner that reads “NATCA Local-EUG Supports KLCC.”