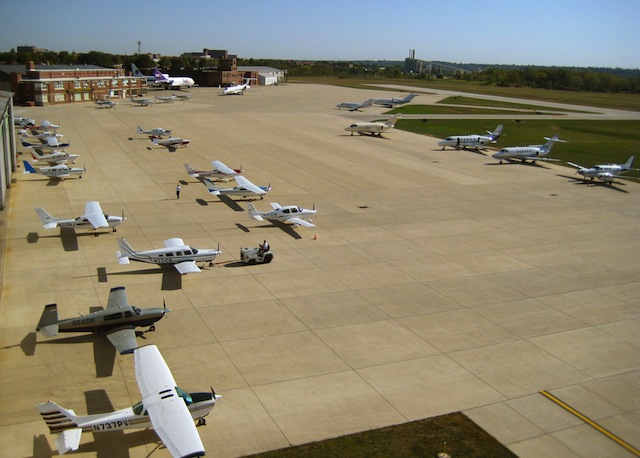 West Lafayette, Ind., is the most densely populated city in Indiana and home to Purdue University, but it’s also home to a 100 percent NATCA membership facility that you may not know much about.

What is interesting about LAF is that the facility is one of few remaining FAA facilities that doesn’t have a Tower Radar Display of any type. LAF members routinely work 100 operations or more per hour using nothing more than position reports from student pilots and their instructors, and binoculars.

In the fall, LAF members see increased traffic and complexity when the Purdue University Boilermakers football team hosts home games. The mix of traffic includes numerous spectators flying in to watch the game as well as banner tow aircraft operations. Temporary flight restrictions around the football stadium add to the complexity before, during, and after the games. This is in addition to Purdue University’s regularly scheduled flight classes. There are also numerous University events and fly-ins throughout the year that require special handling.

With four of eight LAF NATCA members living at least 45 minutes from the facility, it’s difficult to set up regular events outside of the Union’s quarterly meetings, according to LAF NATCA Facility Representative Greg Walsh. However, LAF members do not need to hold a solidarity event to know that their NATCA brothers and sisters support them.

“The solidarity at LAF is seen in how we take care of each other,” said Walsh. “We make sure that people get days off that they need off, while still meeting the needs of the facility.”

Walsh said that LAF NATCA is also encouraging the next generation of controllers to be involved in NATCA.

“Three of the four E-board positions at LAF are held by controllers with five years or less ATC experience,” said Walsh. “New checkouts are routinely encouraged to participate on committees alongside experienced controllers.”

While they may not always be able to get together on a regular basis, Walsh said that NATCA LAF does have an annual NATCA holiday party that brings members, spouses, and significant others together.

NATCA LAF members enjoy numerous activities in their free time. They can get outside and take a stroll along the Wabash River, visit the Purdue University Horticulture Gardens, or explore the city’s Celery Bog Nature Area that is home to 195 acres of wetlands, woods, and fields. Members also enjoy home brewing beer, photography, and distance running. In fact, two members are running in a half marathon, and one will run in a full marathon this November.