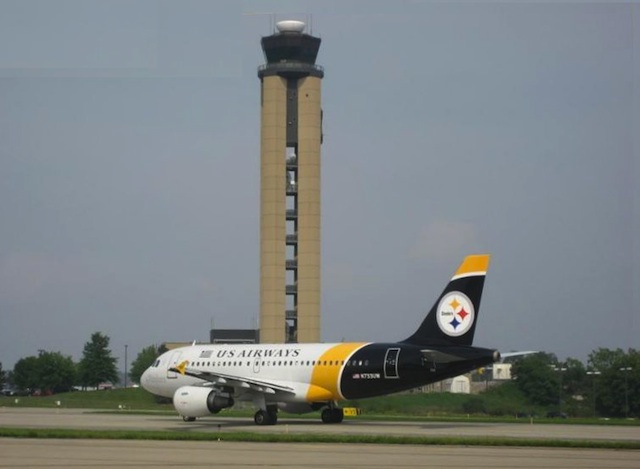 There are 48 NATCA members working in “Steel City” at Pittsburgh Tower/TRACON (PIT), a level nine up/down facility that operates 24 hours a day, seven days a week.

The tower is 327 feet tall. Its construction was commissioned March 13, 1985, and it became operational for air traffic control in 1987.

PIT’s airspace encompasses a 30-nautical-mile (NM) radius from Pittsburgh Airport up to and including 14,000 feet mean sea level (MSL).

PIT NATCA members work air carrier aircraft such as A319s, B737s, and regional jets, as well as C130s, KC-135s, and corporate aircraft that are based at the airport. They also work numerous practice approach aircraft within the 30NM ring.

Stormfels says what’s unique about working at PIT is that the pushes associated with PIT’s hub status of 10 years ago have been replaced by more a constant low volume, steady stream of traffic.

“However, when severe weather hits the east coast airports, we can experience unplanned traffic volumes that include heavy aircraft of every type and nationality,” he says.

While there are several events that affect traffic for PIT, such as Pittsburgh Steelers games, Stormfels says that one special event in particular that affected traffic was when PIT worked Air Force One into and out of the airport during the “Wings Over Pittsburgh Airshow.”

“It proved to be challenging, but with our experienced professional members, it was a huge success,” he says.

With PIT NATCA members living and working in a union town, it isn’t surprising to hear the local is strong and united, and definitely part of the “Steeler Nation.” Stormfels says that PIT is actually a “very senior facility,” and one that is in transition from a high seniority membership to a younger, more involved membership.

“The PIT Local has been forged by the history of unionism in the Pittsburgh area,” says Stormfels. “Whether we raise the Jolly Roger (Pittsburgh Pirates rallying cry) or drop the puck, we – TOGETHER – are NATCA Local PIT. That’s the best part of being a FacRep at PIT.”