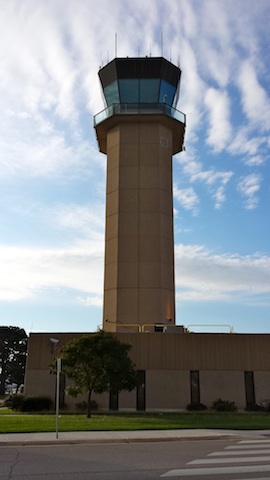 From the tower cab of the facility, commissioned in November 1983, ICT controllers are responsible for aircraft within 45 miles, up to 15,000 feet and up to 5,000 feet in a small shelf area located to the facility’s north and west. ICT controllers also run radar for McConnell Air Force Base (IAB), Beach Tower (BEC), and Hutchinson Tower (HUT). ICT also works with controllers at Kansas City Center (ZKC), whose airspace surrounds ICT’s airspace and extends over it.

ICT NATCA Facility Representative Pat Pelkowski said controllers at the Wichita facility are lucky to work a wide variety of aircraft, due to the city’s long history of aviation, including being a hub of large aircraft manufacturers.

In the 1920s and 1930s, businessmen and aeronautical engineers established a number of successful aircraft manufacturing companies in Wichita including Beechcraft and Cessna. That transformed the city into a hub of U.S. aircraft production and gave it the nickname of “Air Capital of the World.” In addition to Beechcraft and Cessna, Boeing, Learjet and Spirit Aerosystems operate factories in the city today.

“So we work every new Raytheon, Cessna, Lear/Bombardier aircraft off the lines,” said Pelkowski. “Boeing has recently moved out of the area, but they still do maintenance of the aircraft at the airport shared with McConnell AFB, which was the old Wichita airport.”

He said controllers work numerous Learjets, regional jets, Cessna Pistons and Citations, King Airs, and Texan military training aircraft. They also work KC35 tankers from IAB, which will, in the next few years, be replaced by the KC-46 tanker models as the Air Force base won a competition this spring to be the home of the new aircraft.

“We also work lots of T1s (BE40), T6s and T38 trainers from Vance AFB (END),” said Pelkowski. “The pilots in those aircraft come up to ICT from Oklahoma to train.”

He added that American Airlines has recently been training its pilots on the A319 Airbus aircraft in ICT’s area. American Airlines is adding that model of Airbus to its fleet, while also phasing out its MD-80s.

Obviously unique to working at ICT is the variety of aircraft types on a daily basis, but also the amount of wind in the area, which Pelkowski says is particularly strong in the winter and spring months.

“This makes the performance differences in our traffic all that more noticeable,” he said. “You can always tell a new pilot to the ICT when they report turbulence on final – welcome to Wichita.”

Adding to the repertoire that air traffic controllers see every day, ICT members also work the annual IAB air show as well as the Jabbarra Airport’s (AAO) annual airshow. ICT controllers also have to keep an eye on the Argonia Rocket area, located to the south of the facility, where Pelkowski said model rockets are often shot to 20,000 plus feet.

Pelkowski said ICT NATCA is a great local with lots of “NATCAvists” participating on NATCA committees as well as performing functions on the regional and national levels. The local hosts several solidarity events a year, including an annual Christmas social and an annual “NATCA Night at the Ballpark,” where members gather to watch the Wichita Wingnuts minor league baseball team. However, the ICT NATCA brothers and sisters really bond over NCAA March Madness. Pelkowski said the group will occupy several large tables at a local sports bar for two days straight as they watch the tournament.

“Our facility has always been a great one to work at,” said Pelkowski. “Our members are easy going but typical air traffic controller Type A personalities. They work hard while on duty, but most folks have hobbies and other activities that interest them outside of separating aircraft.”