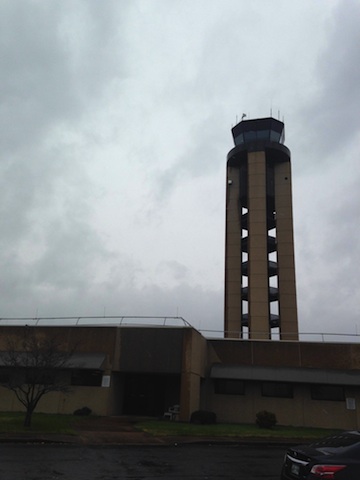 BNA “owns” the airspace from surface to 15,000 feet, and the airspace that comprises approximately 70 square miles of Middle Tennessee between Dickson to the west to Smithville to the east, and from Russellville, Kentucky, to the north and Lewisburg, Tennessee to the south.

All types of aircraft fly through the airspace of this 185-foot tall, 31-year-old tower,

Former (as of yesterday, Oct. 31) NATCA BNA Facility Representative Rodney Turner said there is really nothing that makes BNA’s operations special other than its three parallel runways with a crossing runway that crosses all three parallels, in some manner.

“The close proximity of MQY sometimes creates issues but, like all facilities, we have procedures to assist us in keeping those within our area of control jurisdiction safe,” said Turner.

Turner said special events that affect air traffic for the facility include MQY’s annual air show that often features aircraft like the Air Force Thunderbirds or the Navy’s Blue Angels, along with other aerobatic aircraft; sports games during college and the professional football season, which require Temporary Flight Restrictions (TFRs) over stadiums; the Country Music Association (CMA) Fest event, which allows country music fans from around the world to descend upon Nashville for one week each June; the annual Franklin American Mortgage Music City Bowl, during which two moderately ranked teams from the Atlantic Coast Conference (ACC) and Southeast Conference (SEC play on New Year’s Eve); and, starting next year, the NCAA announced that 12 years’ worth of NCAA Men’s and Women’s SEC Basketball Tournaments will be held in Nashville.

The BNA NATCA local holds regularly scheduled quarterly union meetings, but because of the small number of members and the variety of work schedules, Turner said that solidarity events are limited mostly to individual crews and teams doing things at work, during work hours.

“As an example, during the recent shut down, one team held a ‘poor man’s’ dinner party where folks brought in anything and everything one would eat if they might have little to no income,” he said. “And in the past, I have organized Chili Cook-Offs and my famous ManBurgers – these are half-a-pound or more of hamburger, smoked over charcoal for about four hours.”

The BNA NATCA local is now even smaller, with the retirement of Turner just yesterday, on October 31. He said he’s been preparing himself for this day, and preparing the NATCA local to continue on successfully.

“As an old dog, I’ve worked fairly hard over the past six years, preparing the newer members for their need to take over their local,” he said. “Each, in his or her own way, has elected to become a part of this local’s future.”

Turner cited a recent NATCA event as an example of this dedication to be a part of the union’s future at BNA. The event brought more than 30 members from nearby facilities and their families to a local Nashville Sounds Baseball game. (The Sounds are a minor league affiliate of the Milwaukee Brewers)

Though Turner has served as BNA FacRep on and off for over 10 years, and has served at the regional level for over nine years, his favorite part of being FacRep has been in the past few years.

“Among the better parts of being the FacRep over the past four years is being able to develop a sound, collaborative working relationship with local management,” he said. “A relationship that centers on our operation and our people, two elements within our facility that go hand-in-hand.”

Taking over the role as BNA NATCA Facility Representative is Chris Perdue, who has served as BNA NATCA Vice President and Treasurer. He also serves at the regional level as the Southern Region Chair of the National Constitution Committee. The new BNA board will consist of Ryne Mitchell, Vice President; Jonathan Hines, Secretary; and David Winsinger, Treasurer.

Turner said that combined, the new BNA NATCA leadership has some 21 years of service in the agency, and they have all been members since they walked through the doors of this facility or, in Jonathan’s case, his first facility, Atlanta Center.

“I look forward to watching these men lead this local and take it to places I have not even thought about,” said Turner.