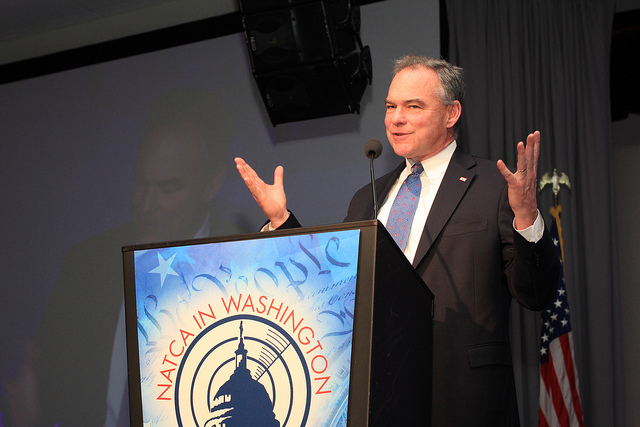 On Monday afternoon, Senator Tim Kaine, D-VA, addressed NiW attendees, covering budgetary issues on Capitol Hill, as well as his efforts to try and restore “regular order” to Congress and thanking NATCA for its support.

Kaine specifically thanked NATCA for its efforts in 2008 to make Virginia a battleground state.

“We (Virginians) have moved into this place where we really are front and center,” said Kaine. “Virginians believe things like federal government shutdowns are stupid. They believe budgetary gimmicks, whether it’s not doing the budget or indiscriminate furloughs, are something we should expect our federally elected representatives to do better on.”

He continued, admonishing those who would attack federal employees, “You’re proud public servants doing a mission that has to be done. Anyone who casually tries to tarnish those in the public service is deeply, deeply misguided.”

Kaine explained how as a member of the Senate Budget Committee, one of his first votes in the Senate was to oppose sequestration.

“My goal was to get back to do doing budgets and getting rid of the foolish sequester,” he said.

The Senator also emphasized the importance of investment in transportation infrastructure, including training.

“I’m here not just because I’m a NATCA fan but because I’m a transportation infrastructure fan,” he remarked. “No nation is successful off of declining infrastructure. People are starting to realize that many of our unions really add value by being so strong on training.”

Kaine continued to discuss the importance of unions in America, as he himself grew up in a pro-labor household with a father who, while a manager, always harped on how the cooperation between enlightened management and a labor force that focused “like a laser beam” on training and safety was an unbeatable combination for economic growth for society.

In conclusion, Kaine said, “Your being here matters. It’s important for you to go up and make your case to your representatives.”

He continued, “Everybody cares about air travel in this country. And everybody knows how critical you are to it. Tell them what needs to happen for things to go right, because they rely on your service, and because you know better than anyone.”