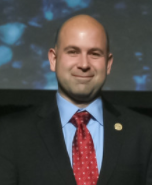 Omaha TRACON (R90) NATCA member Travis Arnold is an experienced controller. He served in the United States Air Force from 2001-2007, during which time he deployed to Iraq twice. In February 2008, he became a civilian controller at Des Moines ATCT before transferring to R90 in January 2009.

On Dec. 13, 2014, Arnold was working the Lincoln sector at R90. The weather was IFR with 800-foot ceilings and eight mile visibility, which warranted all arrivals into Lincoln be ILS. N4120S was being vectored for the ILS approach when Arnold noticed the pilot seemed to be struggling with the headings he was given. Arnold initially thought the winds were causing the discrepancy in the headings the pilot was flying, and he quickly issued corrective headings.

When the pilot was near the final and cleared for the ILS runway 18 approach, Arnold once again noticed that the pilot passed across the final approach course. Arnold immediately made the pilot aware of this and issued a corrective heading again to get the pilot turned back towards the localizer. Even though the pilot acknowledged the turn, Arnold knew something was not right.

After the pilot called Arnold to ask if he knew what was happening, Arnold asked the pilot if his gyro was working. The pilot responded he was receiving crazy readings from his instruments.

Arnold decided to turn the aircraft back towards Lincoln by issuing no-gyro turns to the pilot. He advised the pilot he was a little higher than the last assigned altitude, but wanted to make sure the pilot was straight and level prior to issuing the no-gyro vector.

Later communication with the pilot revealed that originally the pilot did not realize he had descended. However, once he was near the cloud base and he saw the ground, he just wanted to land the aircraft safely in the nearest field. It was because of Arnold that the pilot had the confidence to once again climb through the clouds, get his equipment working, and safely land at Lincoln.