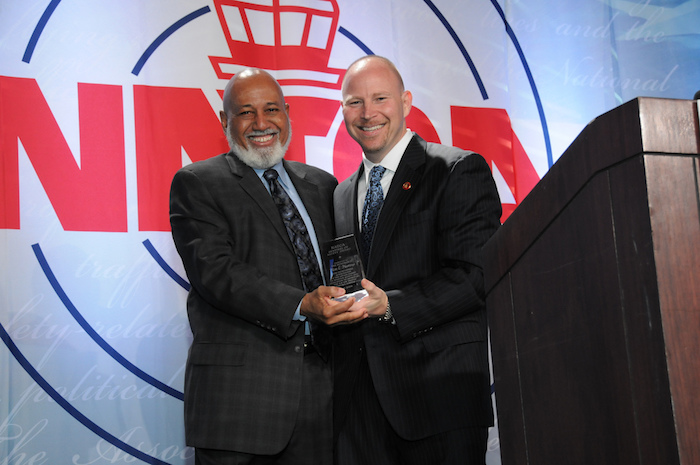 Rep. Alcee L. Hastings, D-Fla., whose impassioned dedication to aviation safety has been highlighted by his efforts to demand accountability and a thorough examination of flawed and secretive Federal Aviation Administration efforts to realign air traffic control facilities and services in Florida and across the country, was presented with NATCA’s Sentinel of Safety award on May 17, 2009, during his appearance before the organization’s annual legislative conference.

The Sentinel of Safety award was created as a way to honor a member of the aviation and legislative communities who has displayed outstanding achievement in the advancement of aviation safety. The award is open to all leaders of the aviation community, with a special emphasis on those whose leadership on aviation safety issues has been historic, aggressive and courageous.

“It is a great day for NATCA when we can bestow this type of honor and say a well-deserved thank you to such a courageous and forceful champion of aviation safety and Congressman Hastings is all of those things and more,” NATCA President Patrick Forrey said. “It is extremely valuable and inspirational to have a leader like Congressman Hastings standing beside the aviation safety professionals that NATCA represents, fighting to demand a complete examination of FAA policies and decisions and open dialogue with all concerned parties.”

The FAA is moving forward on ad hoc air traffic control facility and service realignment efforts without a comprehensive review procedure to determine whether the realignment provides an operational benefit to users, increases safety and efficiency, and/or saves the taxpayer money. This despite overwhelming, bipartisan Congressional opposition, including the delegations from 27 states. NATCA believes FAA Reauthorization is needed to provide that review procedure and compel the FAA to subject all current realignment efforts to this needed layer of oversight, accountability and transparency.

Just as with technological development, realignment efforts completed in a collaborative environment will ensure benefits are realized rather than squandered. Nobody believes this more than Congressman Hastings, whose efforts to put a spotlight on FAA realignment plans in Florida included a March letter to Transportation Secretary Ray LaHood that was co-signed by members of the Florida Congressional delegation.

The letter stated, “We write to inquire about the FAA’s plans for air traffic control services in Florida, particularly the relocation of terminal radar approach control (TRACON) services from West Palm Beach (PBI) to Miami (MIA) and the service provided to the expanding areas around Fort Pierce (FPR) and Vero Beach (VRB). During meetings between Members of Congress, the FAA, and controllers from Miami Approach, Miami Center, and West Palm Beach, discussions have repeatedly centered on the FAA’s lack of a strategic plan for Florida. All the parties agree that FPR and VRB would be better served by an approach facility.

“We are deeply concerned about the recent FAA decision to split tower and radar functions at Orlando International in spite of overwhelming Congressional opposition. The combined configuration at Orlando provided management with flexibility to place controllers where circumstances dictated they were needed. … We are also concerned about the operational benefits of air traffic control facilities that house controllers certified in both radar and tower operations. It is more effective and efficient for a controller to have hands-on working knowledge of both aspects of the operation, so that they can more safely and proficiently hand-off and receive aircraft from and to the next controller. When these functions are split that vital symmetry between radar and tower controllers is lost.”