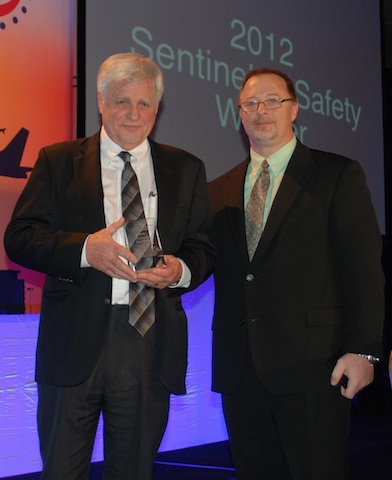 On February 1, 2012, at NATCA’s Communicating for Safety conference in Atlanta, Jim Fossey, the former FAA Air Traffic Organization director of safety and special projects, was presented with the NATCA Sentinel of Safety Award. The honor is given annually to a person outside the union who has helped promote the strong safety culture that NATCA strives for daily.

During a special presentation at the conference, Great Lakes Regional Vice President Bryan Zilonis said Fossey was the catalyst that got the Air Traffic Safety Action Program (ATSAP) off the ground in 2008 after multiple false starts. Since it began four years ago, there have been over 45,000 ATSAP reports filed with no employee retribution.

Zilonis and the union had been trying to develop a program for employees to report safety violations and concerns without fear of losing their jobs over it. To that point, efforts had been met with stiff resistance from the FAA under the Bush administration, which had resisted efforts by federal labor unions to push programs they were developing.

“What we couldn’t accomplish was implementation,” Zilonis said of ATSAP prior to the late years of President Bush’s second term. “The culture at the time was ‘we won’t work with unions.’”

But Fossey did, putting air safety above labor-related disputes. After two unsuccessful attempts to convince the FAA to implement ATSAP, Zilonis said the program was as good as dead until Fossey called him one night and vowed to work with the union.

“My thought at the time was ‘one more strike is the end of the program,’” Zilonis said, adding that he told Fossey he was risking his own job to help the union. “[Fossey] asked me, ‘how about we do the right thing?’”

With Fossey’s support, NATCA and the FAA began working to develop the program that is in place today. After being presented with the award and a video was shown of NATCA staff and controllers thanking him for his service, Fossey was quick to praise the union members as the ones who made the voluntary reporting program possible.

“The people on those slides were the people that did it,” Fossey said. “It became difficult, but they never gave up.”

Former acting FAA administrator Bobby Sturgell signed the agreement in March 2008, but full implementation of the program didn’t happen until during the labor-friendly Obama Administration. However, Zilonis stressed that it never would have happened at all without Fossey’s support.

“Jim Fossey made that phone call and he changed the culture of the FAA in a very profound way,” Zilonis said. “Nobody else could have done it at the time.”