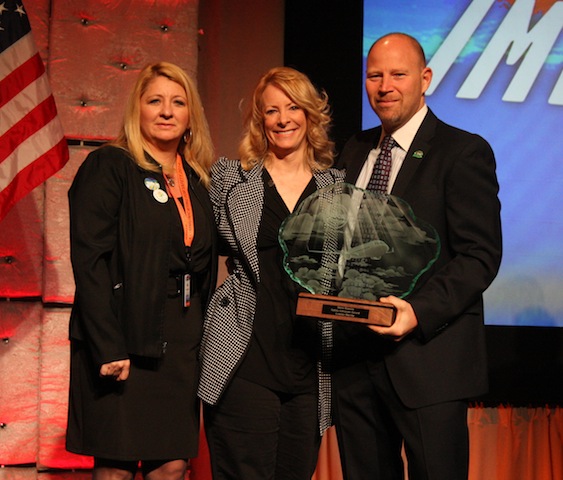 Surrounded onstage at Communicating for Safety (CFS) by the members of the CFS Planning Committee, NATCA Executive Vice President Trish Gilbert presented the Steve Hansen Safety Activist Award to CFS Planning Committee member Leanne Martin (AZO), saluting her dedication to a vast array of safety programs and initiatives which have had a profound impact on the National Airspace System.

“I am thrilled to present this award to an amazing woman who has touched everything that NATCA safety activists do,” Gilbert said during her introduction of NATCA’s highest safety award. “You name it, she’s involved. Usually, it’s behind the scenes, and she doesn’t ask for any credit.”

Gilbert saluted Martin’s work ethic, particularly as it relates to spearheading efforts to plan each year’s CFS event and looking for ways to make it bigger, better, more meaningful and valuable to NATCA members and other attendees than the year before. That’s a daunting task!

Between conferences, Martin is a member of the Air Traffic Safety Action Program (ATSAP) analysis team and is an ATSAP Event Review Committee (ERC) analyst. The ATSAP program continues to grow and flourish thanks to Martin and her NATCA colleagues. It now has 80,000 reports in its first six years. “That’s a tremendous amount of work, in addition to what she does with everything else,” Gilbert said.

In addition, Martin is the lead for training for the Partnership for Safety program and has also once served on NATCA’s Reloaded Committee.

“I am proud to give this year’s award to a very hardworking activist for NATCA,” Gilbert said. “And the women in the room, I hate to make this a gender thing, but women look for other women that they can lean on and count on and [Leanne] is one of those people that I lean on and count on. Many others do so as well.”

Martin was humbled by the award and shared the credit.

“I accept this award for the Planning Committee, the volunteers, the support that we get from the NEB and also the facility locals that work so very hard to get their people out and in attendance,” she said, also thanking the aviation industry whose interest and participation contributed to the largest exhibition area a NATCA event has ever hosted.