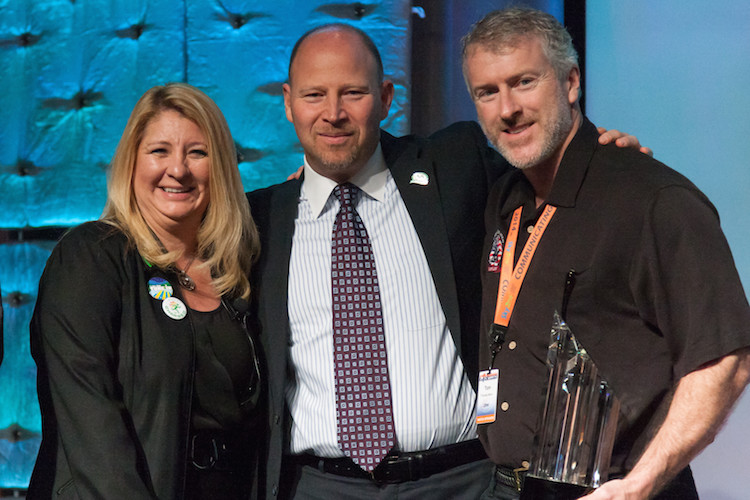 (Second in a series about the awards presented during Communicating for Safety, March 24-26, 2014.)

Tom Morin (Boston Center, ZBW) is a charter member of NATCA who has spent his entire career at ZBW. He is the founding father of NATCA’s Critical Incident Stress Management (CISM) program.

Named for NATCA’s Director of Safety and Technology, the Dale Wright Award honors an extraordinary, positive impact made on our ability to call the U.S. National Airspace System the world’s safest. This award symbolizes a career devoted to service to NATCA and safety.

“It is for an individual who has shown a career in commitment, professionalism, dedication, and integrity,” Rinaldi said as he introduced Ullmann.

Ullmann recounted the story of how he and Morin started the NATCA CISM program in 1995.

“This gentleman and I became very, very close friends and close allies,” Ullmann said. “We spent hours upon hours on the phone talking about the direction the team needed to go.”

Morin is the only original member of the team that still remains. The team currently consists of more than a dozen trained air traffic controllers. They coordinate responses to each incident that occurs and are responsible for caring for the entire workforce. Because aviation is so safe, the NATCA team is always capable of providing an appropriate response and support even during times of simultaneous events. The team’s focus is “always on supporting our fellow air traffic controllers,” Ullmann said, “giving them the tools that they need to recover and get back to work which is what everyone wants to do after an incident or accident.”

Team members also go onsite after accidental employee deaths, suicides, or other equally emotionally disruptive events. The Agency has a comprehensive Employee Assistance Program (EAP) contract that provides our team with a local mental health professional to work with the peer whenever an onsite intervention is necessary. The NATCA team’s focus is always on supporting our fellow air traffic professionals and giving them the tools to make a quick and healthy recovery from the acute stress event.

“We have on-call coordinators for this team, 24 hours a day, for the last 18 years,” Ullmann said. “And they do it on their own time. It’s an amazing feat this team has accomplished.”

The NATCA team is fortunate to have a very good relationship with all levels of management in the FAA. After nearly 18 years, the value of CISM has become ingrained in the culture of the air traffic control profession.

Under Morin’s leadership, the NATCA EAP Team and their FAA counterparts won the prestigious Ross Von Weigand Award in 2012, presented by the National Council on Alcoholism and Drug Dependence. The council is the birthplace of EAP programs. This was a great milestone for the NATCA-FAA collaborative relationship, which Morin has helped build with great care and diligence in the CISM arena, Ullmann said.

Morin’s counterpart at the FAA is Rosemary Katchmar, the Agency’s National WorkLife Program Manager. She had this to say about our award winner: “He is a very special person to FAA dedicated to CISM and to his NATCA brothers and sisters who experience trauma. He has been the catalyst of all things good that impact the behavioral health lives of the air traffic controllers. I am always in awe how he transfers dedication and commitment to strategy and outcomes.”

Morin accepted his award with the CISM team joining Rinaldi, Gilbert, and Ullmann behind him onstage. The CFS attendees gave the entire CISM team a standing ovation as they all came to the stage. 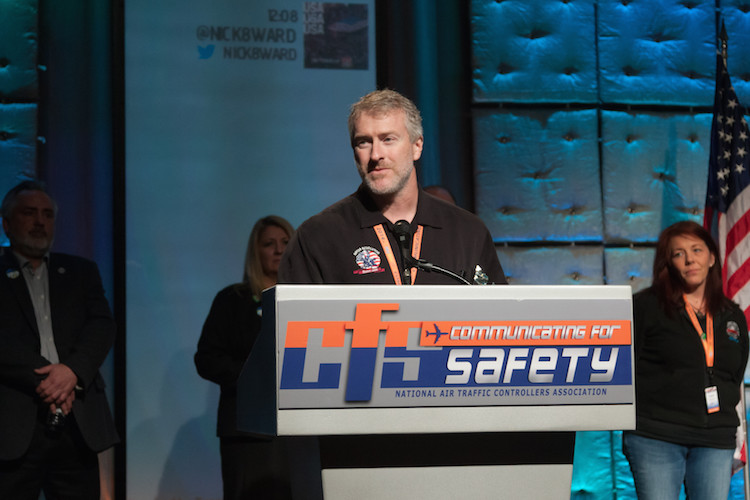 “Thank you very much,” he said during his acceptance remarks. “Doing the work all these years totally has been a pleasure. Who doesn’t love our profession, really? Simple motto: leave the place better than you found it. It’s been a great ride. I love my profession, thank you so much.”