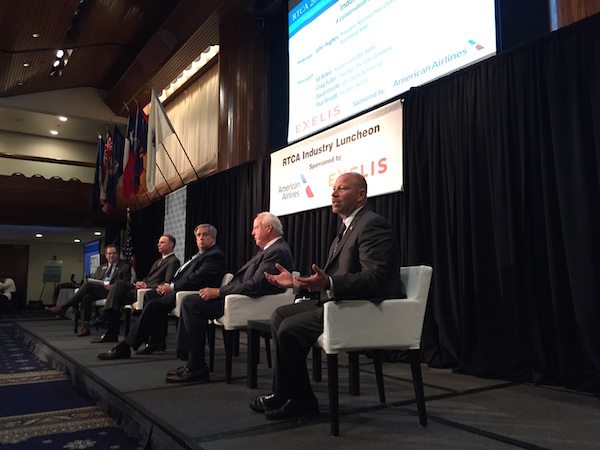 FAA Administrator Michael Huerta opened the symposium and celebrated the progress already made with NextGen technology thanks to continued collaboration between stakeholders.

“We’ve achieved so many accomplishments during the past year with NextGen,” Huerta said. “Through every step, RTCA has been an indispensible partner. Our aviation system is an incredibly valuable asset. Stakeholders must develop a consensus position on FAA reauthorization between all stakeholders.”

Rinaldi participated in a panel entitled, “A Conversation on FAA Reform.” The discussion covered the broad spectrum of challenges facing the NAS.

Ed Bolen, President and CEO of the National Business Aviation Association, described the challenge of simply identifying the problems that need to be solved.

“Finding the problem we’re trying to solve is a fundamental part of what this symposium is about,” said Bolen. “The U.S. has the largest, safest, most diverse, most complex air system in the world. The challenge identified to us several years ago is that what we have today must continue to evolve and transition to ensure that the U.S. continues to be the world leader.”

Craig Fuller, Chairman of The Fuller Company, discussed how collaboratively evaluating the structure of the current air system is a piece of the puzzle in solving current challenges.

“We must try to define what issues are holding back the FAA and the aviation community from moving in the direction that we want it to go at a faster pace,” said Fuller. “All segments can come together, reach agreement, compromise, and move this forward. There are many working groups and entities working with the RTCA.”

Rinaldi stayed laser-focused on the biggest problem facing the National Airspace System (NAS)—consistent funding and its effect on ensuring the U.S. continues to be the world leader in aviation.

“Our major problem is stable, predictable funding,” said Rinaldi. “The NAS, which is an economic engine that supports 12 million jobs and contributes $1.5 trillion in GDP, is an American treasure. The starts and stops, the interruptions in the funding stream inhibit our ability to grow, to enhance safety, and modernize the system.