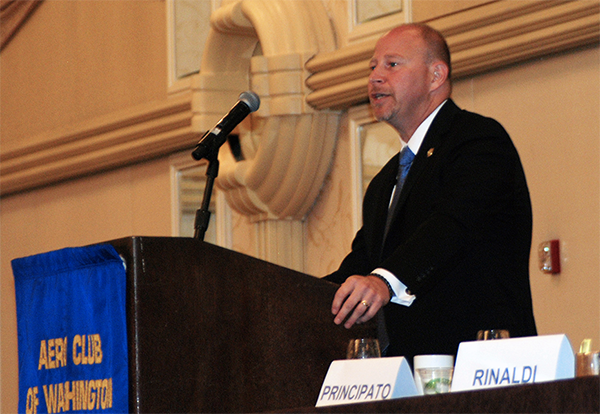 WASHINGTON – In remarks to the Aero Club of Washington today National Air Traffic Controllers Association (NATCA) President Paul Rinaldi called for a change to the way the nation’s aviation system is funded.

“The status quo of unstable, unpredictable funding for the National Airspace System has led to serious problems at the FAA,” said Rinaldi. “It cannot finance long-term projects, develop the system for new users or modernize our country’s aging infrastructure. The FAA has also struggled to maintain proper resources and staff at our busiest air traffic control facilities.”

Rinaldi said these problems are a result of short-term funding bills, government shutdowns, partial FAA shutdowns, threatened government-wide and FAA specific shutdowns, sequestration, and 23 authorization extensions. He reminded members of the Aero Club that sequestration is still a threat, with the second round of mandated cuts set for implementation on October 1.

“Projections forecast that the upcoming cuts to the FAA operations budget will be much larger than the $253 million operations budget shortfall we saw in 2013,” he said. “I shudder when I contemplate the choices the FAA will be forced to make this fall.”

In his remarks, Rinaldi said NATCA believes that the upcoming FAA reauthorization bill must provide a predictable, stable funding stream for the National Airspace System. He stressed that NATCA understands addressing the funding problems may lead to the consideration of structural changes for the FAA.

“We have reached a breaking point,” he stated. “Something has to change. We should not have to worry that the lack of regular order in Congress may affect capacity and, even worse, safety. Before we can support any change, we must carefully examine all of the specifics to avoid unintended consequences. Safety will always remain our highest priority.”

In order to offer its support for any change, NATCA will require that any new model be mission driven and ensure stable, predictable funding to adequately support air traffic control services, staffing, hiring and training, long-term modernization projects, preventative maintenance, and ongoing modernization to the physical infrastructure. The new model must also ensure a robust, dynamic aviation system with continued growth and services to all segments of the aviation community. It must also be vetted among all stakeholders. NATCA opposes any model that derives profit from air traffic control services.

“The U.S. invented aviation, and we have the world’s safest system,” Rinaldi said, in closing. “There is too much at stake to continue on the current path of unstable, unpredictable funding. It’s time to fix the status quo. I’m ready. Are you?”