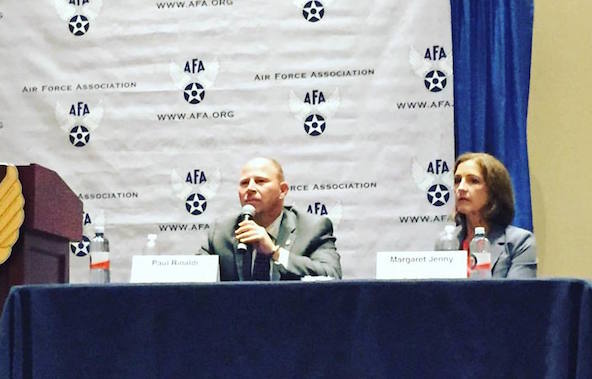 Rinaldi discussed how facing 23 short-term extensions during the last Reauthorization Bill process resulted in a drawn out process of “stops and gos” in trying to modernize the system and implement NextGen, saying there is no way to build the future of the aviation system with unstable funding and stop-gap measures.

“When I think of NextGen, I think of two things,” said Rinaldi. “I think of modernizing and I think of changing the culture at the same time. Obviously, the FAA is a big agency that is set in their ways, but if we are going to change the way the aviation system will roll out procedures, we also have to change the structure of the FAA.”

He continued, “Through collaboration we have actually been very successful in the past in implementing some of these [NextGen] programs. Looking forward to the FAA Reauthorization Bill, it would be foolish for me to sit up here and not talk about that. There’s just no way to plan or put the capital in the right place without stable funding.”

Bolton agreed that unstable funding is a challenge that negatively affects the people and programs that rely on stability.

“The challenge is that over America there are five million miles of airspace. It is the biggest, most complex, safest airspace in the world, but that is not a birthright,” he said. “We have to fight to keep that. No one gets excited about modernization of infrastructure, so we are taking lessons learned and improving things as we move forward to completion.”

NextGen is the biggest infrastructure modernization project in the U.S. since the highway system was built in the 1950s. The success of NextGen programs, as a result of collaboration across stakeholders, has been evident at every turn. Maintaining the current National Airspace System (NAS) while developing new programs, testing and implementing new programs, and measuring their success is a massive undertaking. It is, however, achievable when all stakeholders are involved.

“I like to think that RTCA now stand for Results Through Collaboration in Aviation,” said Jenny, applauding the collaboration between stakeholders. “There is an amazing team and opportunity for success in these programs.”

Continued success will depend upon the availability of funding for new programs and the current NAS.

“Our aging infrastructure is in everything,” explained Rinaldi. “It’s in our buildings. They have to be updated, and with the road blocks of sequester and shutdowns and extensions, that’s just something that we cannot accomplish.” He continued, “We have to look at what the future of aviation is going to be in this country. We’ve invented it, we’ve honed it, we’ve developed it and it’s the best in the world. We have got to continue to be the best in the world.”

“In order to do that, we need to put appropriate funding in place to ensure we continue to modernize our system,” he said. “We’re on track now, but we could fall off track with sequestration.”

Maintaining the safest, most efficient NAS for users is a top priority for all stakeholders. Rinaldi made sure to point out that whatever changes may happen in the FAA with funding and structure, the Department of Defense has an important part to play in whatever structure is decided upon.

“We fly in a civil union,” said Pennington. “We [the military] don’t just train in the NAS, we operate and perform in it.”

In addition to military and civilian operations, rural America especially depends upon stability in air service.

“We have a very diverse aviation system,” said Rinaldi. “Rural America relies on the service that we provide today. If sequestration goes into place, we’re going to be shutting down facilities in rural America. Those airports are highways to modernizing those small towns. That’s where we will get our future aviators from—our air traffic controllers and our pilots. We have to keep that system up and running. The biggest challenge I’d look at with NextGen and this aviation system is a stable funding mechanism and a new structure so we can continue to be a world leader in aviation.”

Another issue on the horizon is the integration of unmanned aircraft into the NAS. One attendee asked the panel how the aviation community plans to integrate these aircraft under the challenge of programs being implemented over long periods of time.

Safety has always been the top priority of all stakeholders in the NAS. It is the gold standard in the world due to many successful collaborative efforts and was the focus of the end of the panel discussion.

“We are changing the culture on reporting incidents through initiatives like the Air Traffic Safety Action Program (ATSAP),” said Rinaldi. “We know of issues now because we can report them in action. By changing the culture to enhance the safety of the system, we have created the safest system we have ever had.”