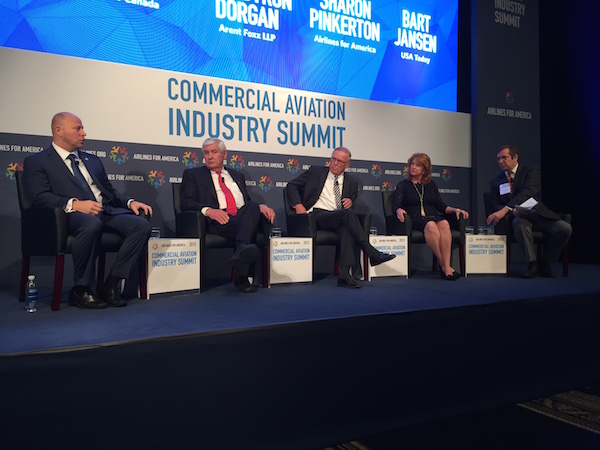 NATCA President Paul Rinaldi spoke at the Airlines for America (A4A) Commercial Aviation Industry Summit on Sept. 28 at the National Press Club in Washington, D.C. Rinaldi participated on the Air Traffic Control Reform panel,  which explored the need for comprehensive reform of the National Airspace System (NAS) and stable, predictable funding for it.

Rinaldi insisted that change is needed. All panel members agreed that the way the aviation system is functioning now is not working very well.

“It would be beyond hypocritical for me to say everything’s fine,” said Rinaldi. “Everything is not fine. The status quo is completely unacceptable.”

With the threat of a potential shutdown looming in the near future, Rinaldi and his fellow panelists denounced the sequester, government shutdown, furloughing of controllers, and shutting down air traffic facilities.

As members of Congress and members of the aviation industry continue to discuss alternative structures, comparisons to other countries’ systems continue to be part of the discussion, but there is concern about the scale of our NAS compared to other systems.

“The aviation system in this country is tremendous,” Rinaldi explained. “It’s diverse, it’s complex, and it’s far reaching. For example, this year we’re running 135 million operations. In Canada, they run about 12 million operations a year. When I look at the size of our system and the complexity of our system, there are many challenges. Now, I’m not saying we can’t do it, we can roll up our sleeves and do anything we put our minds to, I fully believe that, but it’s a challenge.”

Predictable funding would allow for much-needed updates to the rapidly aging infrastructure with which air traffic controllers work. With stable funding, innovative and game-changing NextGen programs would not continually be subject to the “stop and go” nature of the current funding stream.

“When you look at modern technology that can give you real-time updates, as opposed to 10 and 12-second delays, you can more accurately depict where aircraft are, you can space them closer together, you can streamline approaches, you can burn less fuel, you can be greener in the environment,” Rinaldi said.

Rinaldi continued to explain that the procurement process involving the purchase and development of new technologies and equipment is broken. Predictable funding would alleviate the issue of low staffing across the country. The current bureaucratic process does not allow decisions to be made quickly. In a rapidly changing environment, the need for quick decision-making should be a priority.

“We need stable, predictable funding because we are at an all time low of certified professional controllers,” Rinaldi said. “As a matter of fact, there are about 10,500 Certified Professional Controllers right now, and 3,000 of them are eligible to retire today. So, if we are making any change to the retirement system, any change to the structure, we have to make sure we’re protecting the workforce so they stay on board in a new system.

“There are fewer controllers in the system today than when Ronald Reagan fired all the striking controllers in 1981. Just take that and realize if we go into sequester, if we go into another shutdown, if we stop the hiring process and the pipeline of controllers coming into the system, we’re in a lot of trouble. We’re in a lot of trouble in our busy TRACONs and our busy en route centers across the country. We’re possibly not going to be able to open up sectors and work or control traffic. That’s something we never want to do, but at the end of the day, we have to have stable, predictable funding.”

Rinaldi urged all stakeholders to put aside their parochial issues, roll up their sleeves, and get this done.