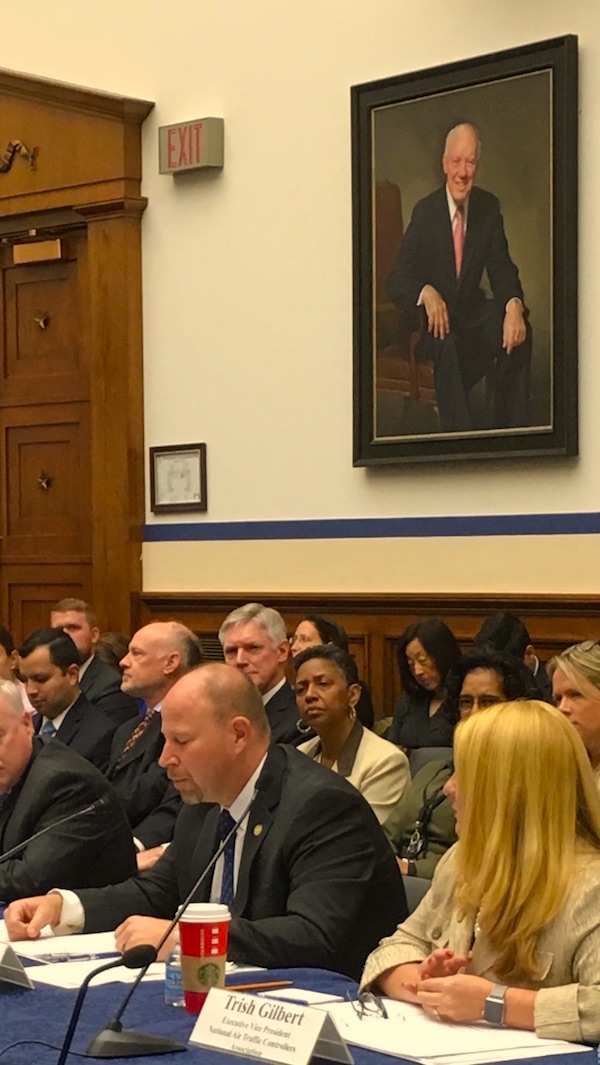 The late Jim Oberstar, former Chairman of the House Transportation & Infrastructure Committee, looks down from his portrait as Rinaldi (front, center) speaks. He is seated next to NATCA Executive Vice President Trish Gilbert.

Good morning, Chairman Shuster, Ranking Member DeFazio, Chairman LoBiondo, Ranking Member Larsen, and esteemed members of the Transportation and Infrastructure Committee. Thank you for this opportunity to sit down with you alongside NATCA’s Executive Vice President Patricia Gilbert and the other panelists to discuss one of the most critical problems facing the National Airspace System today.

Air traffic controller staffing has been a concern for many years, but it has now reached a crisis level. I’ve said it repeatedly over the past few years: the status quo is unacceptable. Controller staffing has fallen nearly 10 percent since 2011, and the FAA has missed its hiring goals in each of the last five years. With one-third of our workforce eligible to retire, the FAA’s bureaucratic structure is failing us. In fiscal year 2015, the FAA fell 24 percent below its staffing goals. If this situation continues unaddressed, we will be hard-pressed to maintain current capacity, let alone expand and modernize the system.

NATCA believes the FAA must take a holistic, collaborative approach to resolve these staffing issues. Increasing staffing to appropriate levels is a heavy lift — we are less than two months into fiscal year 2016 and the FAA is behind its targets. Twenty-seven out of 252 available seats at the FAA Academy in Oklahoma City have already gone unfilled.

Many of our current staffing woes were avoidable. For example, in the FAA’s most recent experienced controller vacancy announcement, Human Resources (HR) disqualified former FAA controllers who did not attach what HR deemed to be the “correct” personnel form to their applications. However, these former employees did attach an official form proving they had previously worked as FAA air traffic controllers. HR issues these forms and they could have easily substituted the correct forms. Instead, they disqualified previously certified controllers. It’s important to note that these positions were not competitively bid, meaning hiring one would not mean excluding another. HR should be the support function, not a bureaucratic gatekeeper that hampers the Air Traffic Organization’s ability to perform the FAA’s mission.

Another challenge to increasing staffing is the hiring process: After sequestration cuts and the 2013 government shutdown suspended hiring for 10 months, the FAA expunged a well-qualified candidate list of over 3,000 in order to institute a Biographical Questionnaire (BQ). The FAA lost ground as well as quality candidates in 2014 due to the first BQ. NATCA subsequently worked with the FAA to improve the second BQ used in 2015, and saw better results. Now, at a time when we need to make up for the FAA’s missed hiring targets, HR is attempting to validate a new entrance exam, the Air Traffic Selection and Training exam, otherwise known as the AT-SAT. Ironically, validating a new exam will require over 1,600 controller days outside the operation and thousands of hours of additional controller overtime.

The good news is that by recognizing the problem and convening this roundtable this Committee is already helping us overcome some of the many staffing issues. We have three main recommendations for reversing the staffing shortage. First, FAA should post an open and continuous vacancy announcement for experienced air traffic controllers. Second, FAA needs a streamlined hiring process, specifically to ease the bottlenecks and bureaucratic delays in HR, security, and medical. And third, we need a less bureaucratic, and more expeditious transfer policy for current FAA controllers — one that takes into account the needs of the entire NAS as a whole, not 315 policies, one for each individual facility. This transfer policy would also encourage experienced controllers at lower level facilities to voluntarily move up, at their own expense, to busier, more complex facilities. Your Committee’s continued oversight is necessary to ensure that these recommendations are taken seriously and implemented.

Our controllers are dedicated, highly skilled professionals forced to shoulder the burden of chronically understaffed facilities. No one wants interruptions to service, delays, and decreased capacity, least of all our controllers who not only work traffic but also participate in the NextGen initiatives that keep our system competitive. In order for controllers to continue providing the type of service the American flying public deserves and has come to expect, we must ensure that hiring, training, and placement processes meet the needs of the mission and aren’t subordinate to bureaucratic red tape and arbitrary rules.

I appreciate you calling this roundtable to facilitate frank conversation, reinforce accountability, and protect the safest, most complex, and most efficient airspace in the world. Thank you.