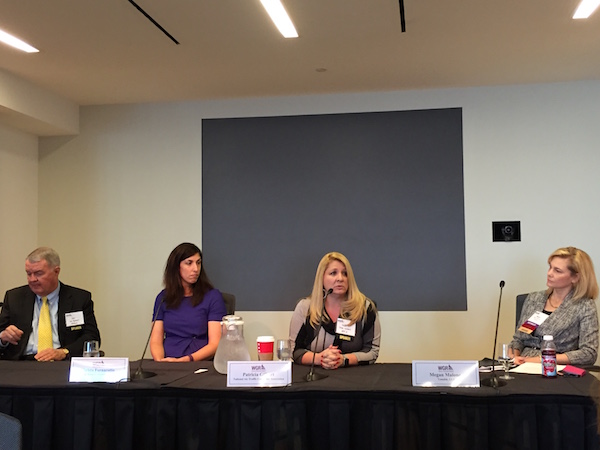 On Dec. 10, Executive Vice President Trish Gilbert spoke on a Women in Government Relations panel titled “Should the Air Traffic Control System be Set Up as a Freestanding Non-profit?” The panel, hosted by Venable, LLP, also included Christa Fornarotto, Vice President of Government Affairs, National Business Aviation Association; and Jim Burnley, Partner, Venable, LLP and Former Secretary of Transportation. The panel discussion was moderated by Megan Malone, Legislative Advisor, Venable, LLP.  Federal Aviation Administration (FAA) reform, taking the FAA out of government, or taking out the air traffic components of what the FAA does was the focus of the panel, and part of a larger discussion happening in the aviation community. Today the conversation centers around the conflict the aviation community is seeing on a regular basis with Congress, from the lack of predictability in appropriations bills, the uncertainty over the status of a true funding bill versus continuing resolutions, to concerns about a full government shutdown.

Gilbert discussed the types of setbacks seen with the last FAA Reauthorization. That includes 23 extensions, fix-on-fail policies, employees working in antiquated facilities, hiring freezes, staffing concerns, and furloughs. These policies not only have a negative impact on every member that NATCA represents, but on the aviation system the U.S. has built and holds dear. She said this status quo continues to be unacceptable and change must occur to ensure the National Airspace System (NAS) continues to operate at its unparalleled high standard.

“We need to set up the U.S. system to be the leader in the world,” said Gilbert. “We are losing ground to other countries that are able to innovate and make decisions quickly when they need to. It is a struggle to get things accomplished with the lack of funding predictability that is preventing the FAA from planning.”

The other panelists shared Gilbert’s concern that the U.S. is losing ground to other countries that have the ability to adjust and make decisions more easily. Fornarotto agreed there is concern regarding FAA Reauthorization and the problems caused by sequestration and government shutdowns, saying that these types of starts and stops in funding are bad for the system and the users.

Burnley added, “Going forward, if we don’t seize the opportunity we have to do this kind of fundamental reform, and set up an air traffic control organization on a non-profit basis, we are going to get further and further behind.”

The panelists also discussed how the U.S. is the largest, most complex, and safest system in the world, but with continued uncertainty, everything the nation has built is at risk, especially the country’s status as world leader in aviation. One of the biggest issues facing the NAS today is the impact of continuing resolutions. The panelists continued that the FAA cannot make decisions, announce contracts, move forward on technology, or maintain its current levels of technology deployment because there is no predictability in its funding. Successfully planning long-term projects is simply not an option. This has caused concern that the U.S. system will fall from world leader to interested bystander on a global scale.

Panelists said looking at other countries’ models of air traffic control reform, like NAV CANADA, can offer important lessons when we consider implementing reform within the NAS. The sizes of the systems, however, are incomparable; there are 10,833 Certified Professional Controllers (CPCs) operating 140 million operations a year in the U.S. Meanwhile, Canada has 2,000 CPCs who handle 12 million operations a year. Fornarotto continued that the complexity of the U.S. system cannot be overlooked when looking at possible reform.

Gilbert emphasized that NATCA has been clear that the status quo is unacceptable and it will not support a for-profit system. NATCA would, however, support a model that has predictable funding and will work for the system, but she said the smaller details of any proposal will be the most important aspect of whether or not NATCA will stand behind a change. She said that stakeholders and leaders in the aviation community are continuing to wait on the details of an FAA Reauthorization bill, which, when released, will require careful examination to see if the changes proposed are something NATCA and the aviation community can support.

“We are going to have to look at a bill and decide if it could improve our system,” said Gilbert. “If we don’t have everybody on board, then we won’t accomplish anything.”

She continued, “We must realize it won’t be the perfect bill for everyone, but if it works and we can support it because it helps the entirety of the system to grow and move forward, we need to consider how to pull together as an aviation community and work through the details.”