Eligibility: This scholarship fund is established for the spouses, children, stepchildren, and legally adopted children of active, retired, and deceased NATCA members with continuous membership in good standing of at least two years. These scholarships are for full-time attendance at accredited colleges and universities within the United States and its territories for an undergraduate degree program.

Award Criteria: NATCA will administer the award of scholarships based on a lottery system. Applicants must apply in writing via the online application to the NATCA National President no later than March 1, 2019 for college/university attendance within that calendar year. Applicants must also submit a qualifying 500-word essay.

Essay Instructions: The essay should be no more than 500 words. The NATCA President and Executive Vice President will judge applicants’ qualifications for the lottery based on the applicant’s completed application, which must include the essay. Note: Topics for the essay will be posted here when available.

Deadline: Applications must be submitted by March 1, 2020 to be considered for the 2020-2021 school year. NATCA will notify applicants as to whether they will receive the scholarship by April 30, 2020.

NATCA President Paul Rinaldi and Executive Vice President Trish Gilbert announced the selections on April 11, 2019. “We were pleased to see so many applicants take part in the process this year,” said Rinaldi. “It is both interesting and meaningful to hear perspective from young people about their experiences during the government shutdown. The essays repeatedly showed that the shutdown didn’t just affect their parents and family members.” Gilbert added, “Congratulations to all the recipients of the 2019 NATCA Scholarship. We enjoyed reading your essay submissions and wish you great success with your academic endeavors.”

The students were asked the question, “How does a government shutdown affect the aviation system in general, and NATCA members and their families in particular?” Out of the 22 scholarship winners, two recipients, Brian Henn and Kiara Kennington, were given the President’s Award, a $2,000 scholarship. The other winners received a $1,000 scholarship.

Brian and Kiara took the time to discuss and compare their experiences with a teacher strike in their school district, coming to Capitol Hill to participate in the NATCA rally earlier this year, the detriment the shutdown had on the National Airspace System, as well as on the morale of federal workers. View both of their essays beneath the full list of winners.

The NATCA Scholarship Program was established for the spouses and children of active, retired, and deceased NATCA members with continuous membership in good standing of at least two years. These scholarships are awarded for full-time attendance at accredited colleges and universities within the United States and its territories for an undergraduate degree program.

The United States aviation system has long served as the gold standard in maintaining an organized, efficient, and most importantly safe traveling environment. In order for this complex system to function at full effectiveness, complete cohesion among the various workings of the aviation system must be maintained. Every single individual in the aviation conglomerate is absolutely essential, even in terms of single employees. The removal of an individual makes the dangers of inefficiencies become evident, not only in monetary cost but possibly in human lives and livelihoods. Due to the structural delicacy of the aviation system, the recent government shutdown, and the subsequent furlough, had ubiquitous effects on air travel, and hindered many of the various functions NATCA members are responsible for. This put into jeopardy the entire organizational structure of America’s aviation system, and thusly billions of dollars were lost to inefficiencies, errors, and miscommunications. Without a full staff, the apparatus that was once leading the world in its size and scale was growing increasingly impotent with each passing day. However, this shutdown also had a much more palpable human consequence. Some families affected by the furlough had no source of income, and had to rely on sheer thrift and savings, as well as making several sacrifices to their family lives to make ends meet, such as cancelling a long-planned vacation, celebrating a birthday or anniversary, or other simple pleasures. Some furloughed employees who had lived month to month had to find another source of income merely to subsist.

On January 10th, my father and I joined members of NATCA, ALPA, PASS, and the AFA in front of the Capitol Building in Washington D.C. in order to protest the December 22nd government shutdown. We were not only accompanied by fellow union members and coworkers, but by families and friends, real people. This sentiment was exemplified in the demonstrator’s chant: “real people, real consequences.” In the chaos of a political and infrastructural emergency, people tend to forget that this shutdown was a truly personal crisis for many. Federal employees were denied their right to steady wages, as well as the promise of security for not only themselves, but for their families. At the protest itself, despite the very political nature of the shutdown itself, many of the speeches by union representatives and congressmen did not attack a politician or party. Many speeches addressed the dangers of the shutdown for travelers, and the economy. However, the most rousing speeches were those that centered around the union values of community, organization, and sympathy for the real humans dismissed as superficial statistics. Thousands of furloughed employees meant thousands of denials to security for men and women who simply want to serve the world’s paramount aviation system. Aided by the camaraderie and spirit of the NATCA protesters, I was able to continue the fight not for “furloughed workers,” but for genuine, passionate people who were wrongly excluded from their jobs, and deserve every single paycheck for their honest labor.

“Now is the time to seize the day!

Stare down the odds and don’t delay!”

As my Senior class project, I directed new actors as they banded together to sing these lyrics from the musical Newsies which tells the story of the Newsboy Strike of 1899. Publishers had raised the price the Newsies paid for newspapers; which they couldn’t afford. With their livelihood in jeopardy, they organized themselves and created a union. In the end, the Newsies beat the odds and won their demands.

I love this musical for its message about working together and standing up for what’s right. I was given the opportunity to put the principle of standing together into action this past fall when the teachers of my school district went on strike. As a musical theater student, when I heard the word strike, I thought of the Newsies and decided it was my time to “seize the day”. I had the opportunity to walk with the teachers on the picket line and feed them with funds provided by PDX Tower controllers and my family. I saw the hardships the teachers faced but, in the end, they won their demands.

I could not have imagined that the principles of solidarity and unity that I learned from a play about an event in 1899 or a teacher strike would soon be so important to me and my family. The longest shutdown in U.S. history began in December 2018 and hardships quickly became obvious to the “cast” of union members that my Dad serves in his position as Facility Representative at Portland Tower.

I saw a lot of similarities between the Newsies reaction and NATCA’s response to the shutdown hardships. Like the Newsies, who used other papers to get their message out, NATCA utilized various media to educate the public about the condition of the membership and the safety of aviation. Perhaps the most important similarity I saw was the support of the public. The public supported the newsboys by refusing to buy papers from the publishing company, decreasing their circulation by two thirds. NATCA members received public support through donations of food and supplies from our local community and our controller brothers and sisters worldwide. Other unions, family and friends showed solidarity when they reached out to Members of Congress with the message to end the shutdown. After thirty-five days, NATCA won their demands.

The lessons I learned from my Dad’s union involvement taught me about standing together as one voice and that was on display in the high school theater as my cast did their best to tell an important story. But it wasn’t until I had the opportunity to put those lessons into action that I truly realized “wrongs will be righted, if we’re united. Let us seize the day.”

Our President’s Award winner ($2,000 from NATCA and, thanks to SkyOne Federal Credit Union, an extra $1,000) is Alexandria Hudzinski (NATCA relative is Frank Hudzinski, Houston TRACON, I90). Our $1,000 scholarship winners are listed below:

Congratulations to our 2017 NATCA Scholarship Program winners! Our President’s Award winners ($2,000 from NATCA and, thanks to SkyOne Federal Credit Union, an extra $500 each) are Kaylie Killian (Christopher Killian, ZHU), Sophia Leonard (Donald Leonard, ZOB, retired), and Samantha Melton (Larry Melton, STL). Below is the list of $1,000 scholarship winners:

Congratulations to our 2016 NATCA Scholarship Program winners! Our President’s Award winner ($2,000 scholarship) is Rebecca Kerr, daughter of Robert Kerr (Cleveland, Great Lakes Region). Below is the list of $1,000 scholarship winners: 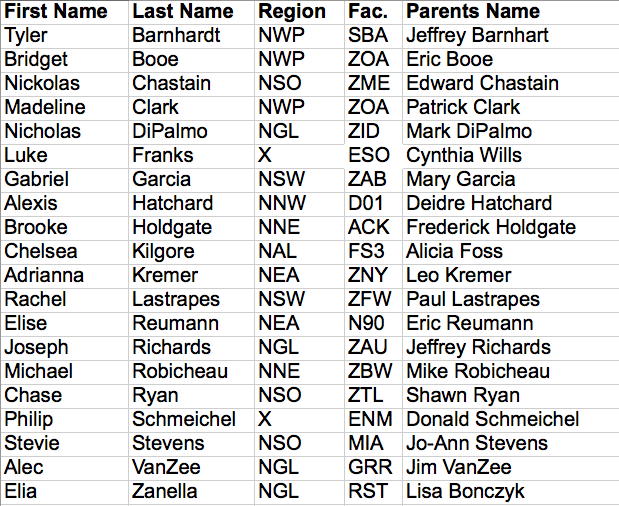