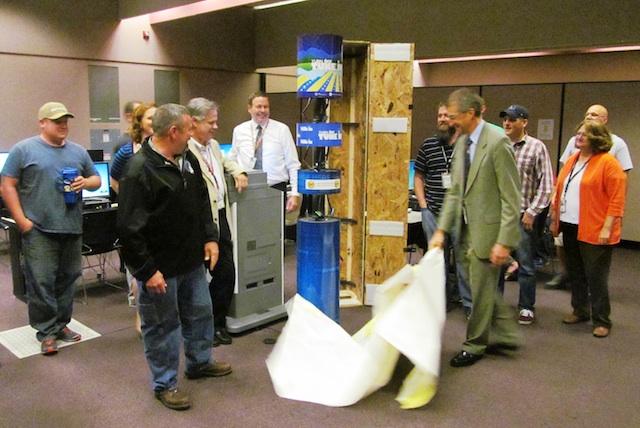 NATCA and the FAA have set up a Turn Off, Tune In charging station at Chicago Center (ZAU). NATCA Facility Representative Toby Hauck and Air Traffic Manager Bill Cound were looking for a way to remind controllers that cell phone usage in the operational environment was distracting and dangerous. Nicknamed the Juice Bar, ZAU’s charging station quickly became such a reminder.

“Cell phones and other distractions are a constant battle for all of us,” said Hauck. “We all have to work together to address the problem continuously reminding each other of the dangers of distractions. Cell phones have become such a staple in all of our lives it is hard to imagine day-to-day life without them. It takes constant vigilance from all of us not to allow that activity to creep onto the floor.”

Cound agreed with Hauck that cell phone usage has no place in the operational environment, and that it was important to take tangible steps to prevent any issues.

“Cell phone usage is not just a management or a union concern,” said Cound. “The consequences of non-compliance are just too high for everyone. That reality gives us all a powerful incentive to work together to eliminate the problem entirely. It certainly helps if you can provide convenient alternatives that allow employees to access their electronic devices on break outside the operation. The Juice Bar is a visible, easily accessible way to reinforce the message.”

The Juice Bar is located in the Briefing Tracker Area of ZAU, where it is important for controllers to have their cell phones for passwords and schedules as training and briefings are conducted there.

The idea to partition the control room into two separate areas to accommodate the charging station in such a central location was initially conceived when air traffic controllers began to ask, “Why can’t we use our cell phones in the Briefing Tracker area?” during open forum meetings. There are monthly meetings scheduled and facilitated by NATCA and front-line managers. These open forums provide a place for ZAU controllers to ask questions and provide suggestions that lead to changes in the facility, like separating the operational environment.

“The initial focus on cell phones in the control room was a vivid way to attract attention to the issue of distractions in the operational environment,” said Cound. “Public awareness campaigns initially focused almost solely on the issues of cell phone use and texting.  But, as the message has evolved to ‘distracted driving,’ people are becoming increasingly aware of other factors that draw their attention away from the road.”

He continued, “Similarly, the Turn Off, Tune In campaign is the catalyst for a broader conversation about other things occurring in the control environment that distract attention from our primary mission: ensuring the safest, most efficient use of the nation’s airspace.”

Turn Off, Tune In has prompted several air traffic control facilities to install charging stations and implement procedures similar to ZAU. NATCA members and guests attending Communicating for Safety this year could also access charging stations just outside of the doors to the conference hall as a final reminder to turn off and tune in to the presentations and panels before entering.

“Our profession lies in the balance of perception,” said Hauck. “If we allow a few bad examples to rule the perception of Congress and the American people we will not have the same profession we have today. It is incumbent on all of us to keep our profession in high regards. Turn Off, Tune In is just one of many ways for controllers to continue to promote our professionalism and pride we have for our job.”