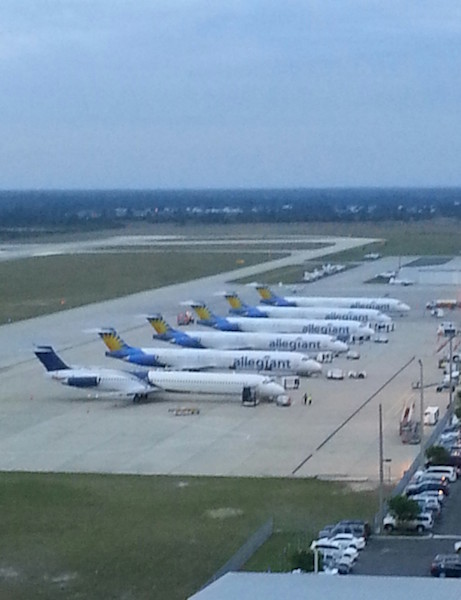 PGD was originally approved as a joint cost-share tower with the FAA shortly before Hurricane Charley hit in 2004. The hurricane was so devastating that it was not clear if the airport would stay open. Luckily, government grants, hurricane relief, and commercial traffic have not only revived PGD, but have turned it into the fourth fastest-growing airport in the country.

When RSW FacRep Ross Costa learned that the Port Authority of Florida had reached out to Raytheon to secure STARS technology for PGD, him and NATCA Terminal Automation Modernization and Replacement Rep Mitch Herrick stepped in. They were able to tour PGD with Port Authority representatives and FAA managers, and assist them in selecting the unique technology PGD needed to maintain and grow their airspace. Due to this successful collaboration, the Port Authority financed and had the new technology installed within a year of the initial tour.

The transition to STARS has not only benefitted controllers working the ever-growing traffic at PGD, it has also improved the airspace surrounding nearby RSW. Up until the transition, controllers would have to personally call in every inbound and outbound departure in order to coordinate them within the airspace. This substantially increases workload. In addition to PGD and RSW traffic, a flight school located near PGD plans to make PGD its home base. STARS technology will mitigate this increase in workload. With the capabilities of the new equipment, coordination within the airspace has gotten easier for controllers.

After the installation, Costa and Herrick returned to PGD to assist with hands-on controller training. The training consisted of face-to-face meetings to talk about the equipment’s different functions, how procedures would change, how procedures would look from TRACON to the tower, as well as how traffic, procedures, and weather would appear on the scope. They also developed reference guides that include details on all of STARS’ technology functions so controllers can more easily access the information.

“The STARS system we put in PGD will vastly increase efficiency and safety,” says Costa. “There is no doubt about it. It’s a fast-growing facility because of its prime location and concentration of flight schools in the area. Prior to STARS, controllers there weren’t aware of some of the traffic that existed around the airport. The fact that they are now able to see those aircraft will vastly increase safety and efficiency.”

Now, instead of a controller calling a tower to say that an aircraft is coming in, a controller can simply indicate the type of aircraft, as well as an estimated time of arrival, because PGD and RSW have fully automated displays that show every aircraft as well as advanced arrival data. Controllers are able to type in exactly what the aircraft is doing in a three-character scratch pad. The towers then have better, more up-to-date information when coordinating with one another about traffic. This has reduced landline calls by 95 percent as controllers are able to communicate directly over their scopes with the scratch pad.

“We’ve been able to put together a very good system with our approach control facility RSW, enabling a large amount of coordination via scratch pad entries and automatic releases for Instrument Flight Rules (IFR) departures,” said PGD FacRep George Harper. “This drastically cuts down on burdensome line communications and enables us to more effectively manage our airspace in relation to IFR departures.”

The learning curve for new technologies can be hard to overcome, but PGD and RSW controllers had open communication to help ease the transition. One week after the transition, telephone conferences were set up to assess what was working and what wasn’t at both PGD and RSW. Once issues were discussed, the facilities implemented changes to correct them. Over the course of the next month, controllers at both facilities hope to resolve all issues and concerns.

“Getting STARS has been a great addition to the level of safety and quality of service we can now provide here at PGD,” said Harper. “We are no longer solely at the mercy of the pilots to tell us where they are approaching the airport from. With STARS, we now know where they are coming from and can plan accordingly, virtually eliminating any unpleasant surprises in the pattern. PGD is growing fast and I hope STARS is just the beginning of upgrades PGD will get to help us continue to service our users.”