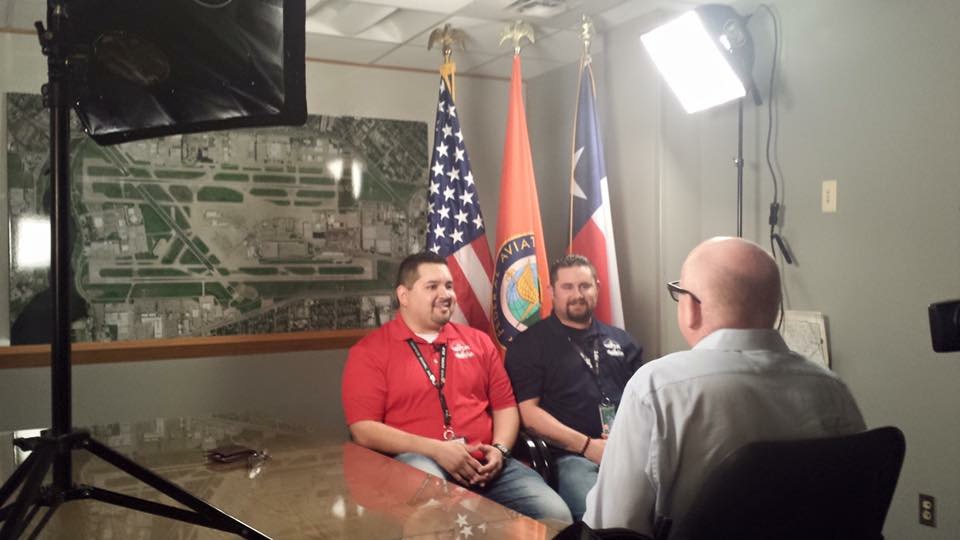 In the early morning hours of Sunday, Oct. 11, a Piper Lance departed Dallas Love Field (DAL) headed westbound to Odessa, Texas. Shortly after takeoff, the plane went dark. No communication. No transponder. It was an apparent total electrical failure.

DAL seven-year veteran controller and FacRep Nick Valadez tried repeatedly to reach the pilot, to no avail. From the audio transcript:

Lance 3-2 Bravo, do you have transponder on?

At that point, Valadez contacted Dallas-Fort Worth TRACON to report the issue and ask for assistance in reaching the pilot.

Over the next few minutes, the two controllers in the tower at Love Field, Valadez and NATCA member Wade Martin, spotted the primary target on radar, east of the field and then north of the field. The transponder never came on.

Then, a call came in on the landline telephone to the tower from Dallas 911.

911 Operator: Hi, this is Ashley, I’m with Dallas 9-1-1. We just got a call, the guy said that he was trying to get a hold of Love Field Tower, he had total electrical failure and he was trying to land.

911 Operator: He hung up and called from a disconnected cell phone, so all that I have is like the general area he is calling from, which was like the Inwood – Dallas North Tollway area.

(Valadez to Martin): He called 911 and said he electrical failure.

The pilot descended to get cell phone reception, with no lights on, and called 911 from his personal cell phone. The connection then dropped. The pilot continued to fly low level around Dallas with no lights on trying to call the tower again. Four minutes later, the call came through to the tower.

911 Operator: This is Stephanie with 9-1-1. I have the pilot that was having the electrical issues and couldn’t land, I have him on the line.

Martin: Can you hear me?

Martin: Do you have your gear down?

Pilot: I have no indications. Can I overfly the runway?

At this point, Martin, a controller with 15 years total experience, including with the Air Force in Pakistan and Tinker Air Force Base in Oklahoma, answered the phone. Over a period of about 20 minutes, the pilot flew the airplane while talking on his cell phone to Martin.

“Do you have the airport in sight?” Martin asked the pilot. “Yes, sir,” came the reply.

During this time, the Dallas Stars hockey team was returning from Denver after a game the previous evening. The Stars, in a Boeing 757, landed on the west runway at DAL due to the emergency airplane flying north and east of the airport.

Then it was time for the gear check. A pilot in a twin engine King Air had taxied out waiting for takeoff. That aircraft, in addition to the Dallas Stars jet and an airports operations vehicle, was waiting and watching for the airplane. Martin gave permission for the pilot to overfly the runway.

All eyes were on the plane using the back lighting from various hangars and businesses. They determined that the landing gear was in fact down on the unlit airplane. Martin cleared the Piper Lance to land.

The pilot performed a dead-stick landing without the engine running. He turned off the engine prior to touchdown to reduce the chance of a landing mishap if the landing gear collapsed with the engine running. With no lights on at night, the airplane was invisible to the tower in the air. Valadez asked the airport vehicle if the plane had landed. The answer was yes, and the pilot was safe on the ground.

On Oct. 30, DAL Front Line Manager Catherine Currier wrote letters of commendation to Valadez and Martin. Currier wrote, “As a direct result of your situational awareness and ability to take immediate action, a potentially dangerous situation was averted. Your teamwork and initiative was a direct display of being an Air Traffic Controller. Our primary mission as professional controllers is to ensure safe air traffic operations. At that time, you displayed how a person in your position can help avert an unsafe situation and your performance was extraordinary.”

The flight assist received local media coverage last week from the Dallas-Fort Worth NBC affiliate. Both Valadez and Martin were interviewed. You can view the story here, and watch as both controllers detailed the event on camera.