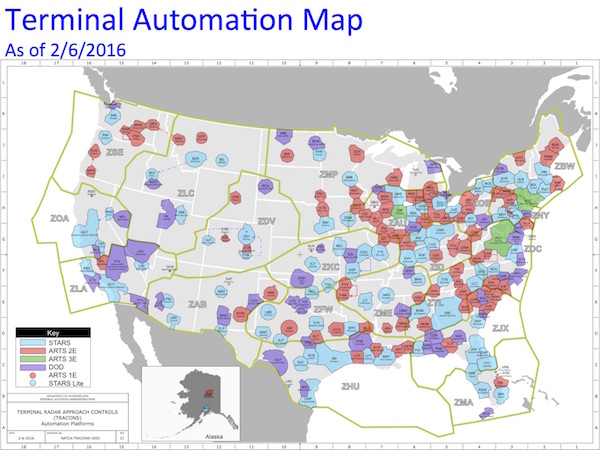 At GSO, not even the threat of the government shutdown slowed their successful transition. Despite the looming possibility of furlough, which caused concern the transition could fall behind schedule, GSO NATCA Terminal Automation Modernization and Replacement (TAMR) lead, Ian Crisostomo, was able to move the initial operating capability (IOC) up 13 hours. He got the entire 24-hour successful test run of the STARS transition prior to the possibility of staff having to go home. The FAA approved of this problem-solving measure and NATCA members made it happen.

New STARS features at GSO include minimum separation capabilities and J Ring capabilities. Even more benefits will be seen this summer when additional features are scheduled to come online, including the ability to operate in fused mode. GSO will then be able to incorporate Automatic Dependent Surveillance-Broadcast (ADS-B) capabilities in conjunction with existing surveillance sources into their Fused Radar presentation.

“The biggest impact GSO has faced so far is the ability to accomplish the required training,” said Crisostomo. “The facility came together as a team to accomplish this and we were able to accomplish it all prior to our goal end time.”

NATCA’s TAMR team led transitions at T75 and FAR, which went off without a hiccup. This deployment team, along with NATCA site leads, have made this look remarkably easy despite the challenging nature of upgrading outdated technology with limited staffing.

“This is an amazing culmination of the enormous amount of work by many people,” said T75 TAMR Rep Steve Hartsoe, who has been with NATCA’s TAMR team since 2011.

At FAR, the transition went smoothly with a minor hitch. Handoffs (the transfer of radar identification from one controller to another) with Minneapolis Center (ZMP) and Grand Forks Air Force Base (RDR) weren’t working correctly, initially, but within two hours of handing aircraft off manually, the appropriate changes were made to allow controllers to make more efficient handoffs using STARS. Throughout the whole process, a vast majority of timelines and deadlines were met and FAR was able to stay on track.

“Training on the new system for the over 20 controllers was completed within two weeks and the switch over to STARS was a complete success,” says FAR FacRep Cory Retzlaff. “FAR NATCA TAMR Rep Andrew Murphy was a rock in this whole process. The facility is lucky to have him so involved and dedicated to the cause. I can’t thank him enough.”

“Team effort from all parties involved is the reason this program is so successful,” added FAR TAMR Rep Andrew Murphy. “The controllers, tech ops, engineering services, TSLE, Denver operational support faculty specialists (OSF), and NATCA were all present at FAR, and were huge in making our STARS transition a success. They’ve been doing this for a while and seem to have a process that is fully mature and flexible.”

In the coming months the FAA will deploy TAMR at an unprecedented rate. TAMR Phase 3 Segment 1 will be completed when Potomac Consolidated TRACON (PCT) transitions in late February, Chicago TRACON (C90) in April, and New York TRACON (N90) in May. Despite the doubts of many, dedicated controllers and their TAMR teams rolled up their sleeves and got it done.