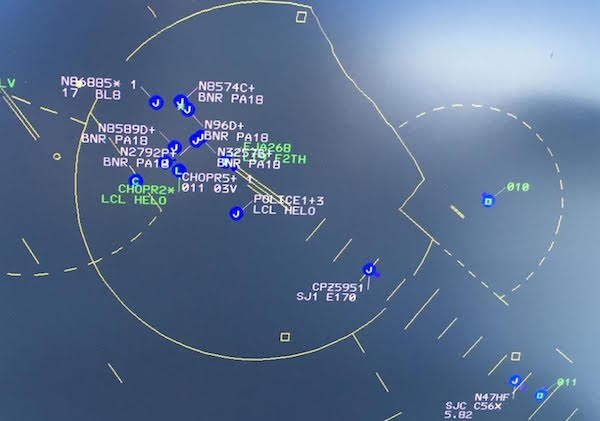 The extra work and preparation for handling the influx of traffic associated with the Super Bowl is always a great example of teamwork in the National Airspace System (NAS). For this year’s Super Bowl, there was a large team responsible for the entire Bay Area. The team constructed special routes, trained controllers on the new procedures announced by the FAA, and coordinated a host of special applications that accompany an event of this size. The task to create the Super Bowl 50 traffic management plan was enormous and the success of the overall operation can be attributed to the dedication of those teams and the hard work of controllers working traffic. They adapted to every instant change or immediate issue to help ensure the event’s success.

At ZOA, controllers were forced to give up leave opportunities and work required overtime shifts to provide staffing for every contingency. Super Bowl team members worked long hours on the operations floor as subject matter experts. They were available to answer any operational or procedural questions a controller might have — in real time and at a moment’s notice. The group’s mindset was, “what can we do” rather than, “what can’t we do.” This positive outlook motivated controllers to get the job done.

“The level of dedication shown that week demonstrates the professionalism of the employees that staff the NAS every single day,” said ZOA FacRep Scott Conde. “What most people don’t realize is that the massive traffic influx into the Bay Area is far from over as the Pebble Beach Pro Am golf tournament starts this week with aircraft already flooding back into the Bay Area.”

When San Jose (SJC) received the new fixed-base operator (FBO), combined with the Super Bowl 50 trafffic management plan, they created a new permanent second ground control position. This involved creating new standard operating procedures (SOPs) and getting everyone trained within a few weeks. Taxiways were closed for parking and specific routes were created for inbound and outbound aircraft due to the limited taxiways.

“We increased our staffing and on Sunday night, we remained open for an additional two hours, closing at 2 a.m. instead of the normal 12 a.m.,” explained SJC FacRep Evan Baker. “The additional media, banner tows, law enforcement, and everything else proved to be the most grueling. Levi’s stadium is just two miles off the end of our runways. This was where our workload was the highest as eight-to-10 aircraft were always in the way of our normal daily traffic.”

Livermore (LVK) started Super Bowl meetings with the district, airport management, the new FBO, and NATCA in late February 2015. They had monthly meetings with the airport management team as well as meetings every two months with the district, other airports, NATCA, and the Super Bowl committee. As the Super Bowl grew near, controllers were briefed and updated regularly until the day of the event on the demanding nature of the job at hand. When LVK worked on their memorandum of understanding (MOU) for annual leave back in May, it was agreed that no leave would be approved for the week of the Super Bowl. The schedule was finalized almost two months in advance so people knew what they were working and when. Everyone who could worked overtime from the Wednesday before the Super Bowl until the Tuesday after it.

“We didn’t know what time we would need to stay open until a week before and the controllers here had no problem adjusting their shifts to allow us to be open until midnight instead of our usual 9 p.m. closing time,” said LVK FacRep Dion Johnson. “We also had many meetings with the FBO the week before the Super Bowl to cement our plans. The whole event went smoothly and without any hiccups. I believe this was due to the cooperation between NATCA, the FAA, airport management, and the FBO. We all agreed we will be ready for the next one!”

In preparation for the Superbowl, Hayward (HWD) got in touch with airport management at HWD and the FBO. Together, they worked out a plan of how controllers would work the projected 100-plus extra aircraft on the field, including where and how they would park on the field. They also planned for the potential closure of a runway and taxiway, if needed, to ensure that there was sufficient parking for the aircraft. Once all of the plans were worked out, it was merely a matter of waiting for the Super Bowl.

“The FAA and NATCA worked together to ensure that the decisions being made by airport management and the FBO included input from the controllers to ensure that we would all be on the same page for planning and working the aircraft,” said HWD FacRep Kevin Kilian. “One of these decisions included not allowing any flight training to occur during the day leading up to the Super Bowl through the day after. With the possibility of a runway closure and the fact that some of our taxiways aren’t stressed for larger aircraft, airport management and our air traffic manager felt flight training would allow far too much risk with the expected additional aircraft traffic.”

HWD also staffed the facility to be open longer, extending their normal closing time until 2 a.m. with extra certified professional controllers on duty after the game to ensure there were adequate staffing levels to work the traffic departing after the game. It was the right call as the facility had a large push of private jets that departed directly after the game, which required all positions to be staffed in order to handle the workload.

“The Air Traffic Control System Command Center (ATCSCC) played a significant supporting role in the Super Bowl 50 traffic management plan,” said ATCSCC FacRep Tony Smith. “We started by creating a Super Bowl planning team more than nine months prior to the event. This planning team was comprised of members from ATCSCC management and NATCA members that participated in monthly and weekly planning telcons. These telcons assisted Oakland Center (ZOA) and Northern California TRACON (NCT) with the development of their regional arrival and departure route structure, suggested traffic management strategies to help mitigate the anticipated extra volume, and assisted in socializing the traffic management plan with industry and the general aviation community.”

Additionally, the ATCSCC created a Super Bowl position that included one terminal specialist and one severe weather specialist working together to address any Super Bowl related issues during the arrival and departure phases of the event. In the end, the ATCSCC implemented 16 different route advisories and one SFO ground delay program in support of Super Bowl 50.

Controllers at ZOA, Northern California TRACON (NCT), the Command Center (DCC), as well as almost all of the Bay Area Towers including LVK, SJC, HWD, San Francisco (SFO), Oakland (OAK), Napa County (APC), and Santa Rosa/Sonoma County (STS) all went above and beyond to help make Super Bowl 50 a success. They look forward to handing the baton to their brothers and sisters in the Houston area who will work Super Bowl 51 traffic in February 2017.