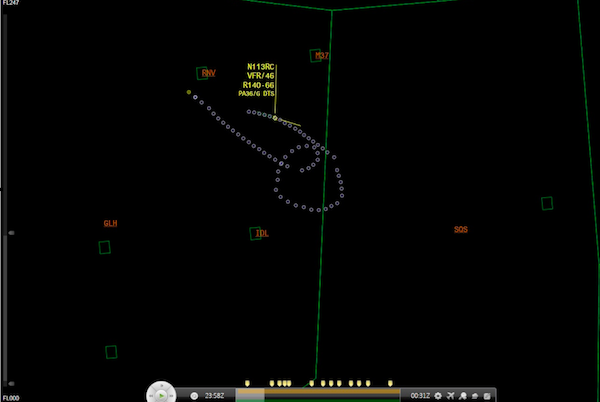 Darren Tumelson was the controller on duty working the Greenville and Helena Low Altitude Radar Control Sectors. Tumelson has just over three years of Certified Professional Controller (CPC) experience at ZME in Area 4, working the airspace south of Memphis, Tenn., to just north of Hattiesburg, Miss.

N113RC was radar identified, issued the local altimeter, and continued its climb to the southeast. About 15 miles southeast of RNV, while climbing through 6,500 feet, the aircraft’s left engine shut down and the pilot declared an emergency.

Tumelson quickly determined the nature of the emergency, obtained the required information, and notified the supervisor on duty. For the next 12 minutes, Tumelson provided navigational assistance and airport information to N113RC as the pilot diagnosed the situation, and determined his landing options. Initially, the pilot intended to land at Indianola, Miss. (IDL), but was unable to activate the airport lighting to locate the airport. Tumelson provided information concerning two other alternate landing sites – the towered airport at Greenville, Miss. (GLH), and the airport at Drew, Miss (M37). Schindler requested to return to RNV due to his familiarity with the airport environment.

Tumelson continued to provide navigational assistance to Schindler as he struggled to maneuver the aircraft with only one engine operating. Tumelson provided updates to the pilot concerning the availability of fire and rescue equipment at Cleveland airport, and provided assurance that the requested services would be available and ready.

N113RC safely returned to RNV 20 minutes after departure, and 14 minutes after declaring an emergency. Schindler stated he had a ”hard landing” but there was no damage to the aircraft and no injuries to him or his family.

Schindler stated in a phone call with the facility that he and his family wouldn’t be alive today if it weren’t for the valuable assistance provided by Tumelson, and the team members that assisted with this event.

Darren Tumelson arrived at Memphis Center in May 2010, and was fully certified in Oct. 2012. He has been a NATCA member since his arrival in Memphis.

In honor of Tumelson’s dedication to safety, ZME was proud to present him with a certificate to commemorate the safe handling of aircraft N113RC and the family he saved that day. In attendence were ZME FacRep Neil Caputo, Darren Tumelson, Darren’s wife Alysse Tumelson, Southern Region Alternate Regional Vice President Jason Arnold, and ZME Air Traffic Manager Tim Nelson.