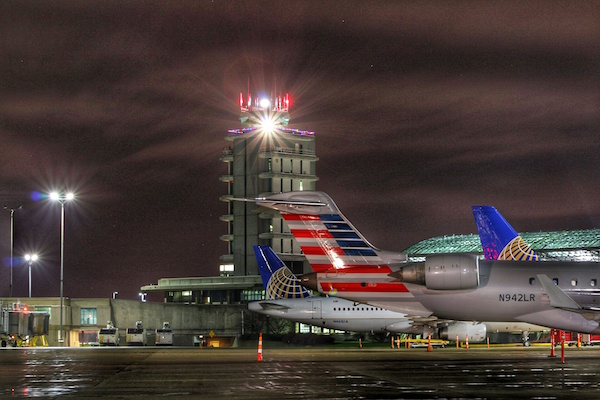 There are 22 NATCA members at Gerald R. Ford (GRR): 15 certified professional controllers (CPCs), two CPC-ITs, four developmentals, and one staff specialist. GRR is a level 7 facility commissioned on Nov. 24, 1963, and is responsible for Class C airspace in an approximate 40-mile radius surrounding the facility.

GRR controllers work a large variety or aircraft. KC-135 tankers from Selfridge National Guard Base (MTC) and Milwaukee/Mitchell (MKE) often go to GRR to practice instrument approaches as well as touch-and-gos. There is also a large variety of business jet and airline traffic as the area is rapidly expanding. GRR is also home to the West Michigan Aviation Academy, a charter high school that has recently acquired two C172’s to start flight training at GRR, which will affect work load.

“Contrary to prior claims from bordering facilities, GRR is in fact the ‘Gem of Western Michigan,’” explains FacRep Jim VanZee. “Grand Rapids is widely recognized as Beer City, U.S.A. While the winter weather can be tough at times, the warm, sunny summers more than make up for the other eight months that are gray, gloomy, and snowy.”

Oshkosh is the main event that affects traffic at GRR. Many aircraft from the eastern U.S. head to the annual air show and fly through the facility’s airspace before crossing Lake Michigan. Young Eagles flights are also common, which require prior coordination with event organizers to make sure they run smoothly.

While staffing makes solidarity events hard to set up, members at GRR routinely get together with their families for retirements, transfers, Christmas parties, and the Super Bowl, every year.

“Our NATCA atmosphere is fantastic!” says VanZee. “We are a 100 percent controller facility, with only one staff specialist keeping us from being 100 percent overall. We have a very active local with members attending and participating in training classes, legislative affairs, Communicating for Safety, and National Article 48 opportunities.”

“We have members that have stepped up to take the lead on local pilot meetings, OSHECOMME, NATCA in Washington Legislative Liaison, local safety councils, recurrent training, and more,” VanZee explain. “The thing that I enjoy the most about being the FacRep here is the strong belief in, and support of, NATCA by our membership. They inspire me with their willingness to not ‘just’ be a member, but an active member.”