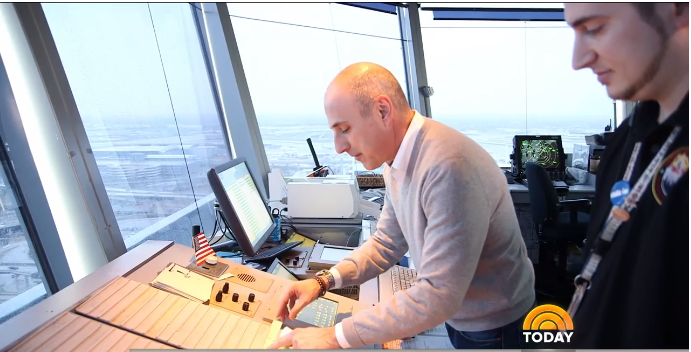 On March 2, the Today Show aired a segment featuring Matt Lauer interning as an air traffic controller at John F. Kennedy ATCT (JFK) as part of the show’s special series, “Up for the Job.” As part of this series, each of the show’s anchors performed a one-day “dream internship.” It turns out that Matt Lauer’s dream internship has always been to work as a controller at JFK!

“Matt was great to work with,” said Abraham. “He had a genuine interest in the complexities of our profession and had great respect for everything we accomplish on a day-to-day basis.”

Gallo even got to teach Lauer how to stuff and read flight strips. Later, Lauer took a turn guiding traffic in the facility’s simulator and not only learned the intense focus and multitasking the job requires, but also the huge adrenaline rush that comes with it.

“It was really cool,” Lauer said after the segment ended. “And that’s one of those jobs where you only hear about those people when something goes wrong. But on a daily basis, they do that job so well, day-in and day-out.”