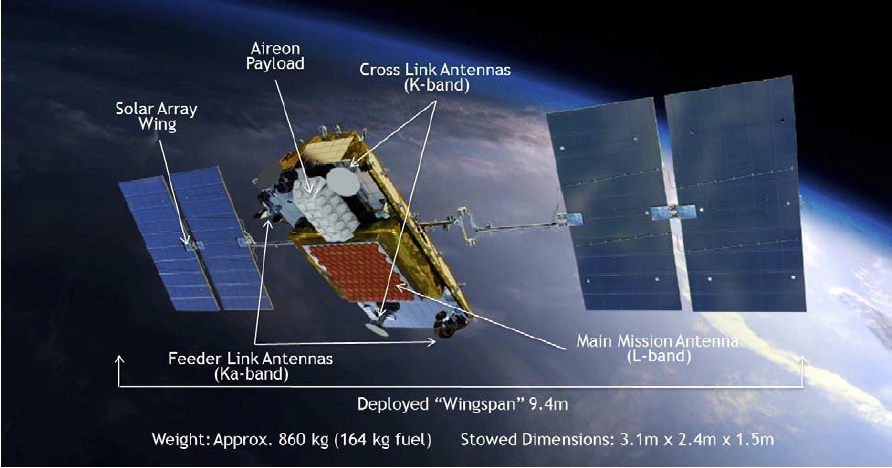 Launches will be accomplished via a combination of Space‐X and Russian Dnepr rocket systems. The first Space‐X launch is scheduled for July 2016, and final launches are expected to be complete by 2017. Russian Dnepr rockets can place two satellites into orbit at a time. Space‐X launches will place 10 satellites in orbit at a time via a unique dispenser capsule. Once the dispenser is in orbit, satellites make their way to the assigned station, which can take as long as six months, depending on the distance.

Once on station, satellites remain static to one another, but the entire grid orbits at approximately 17,000 miles per hour at 485 miles above the Earth. The Aireon ADS‐B payload on board any one Iridium NEXT satellite has a surveillance footprint the size of the continental United States. Placement and movement of the satellite network provides overlapping coverage. Any given satellite is in view for about six minutes at a time and satellites are cross-linked to manage data flow to ensure redundant communication paths are available.

Thales Alenia Space (TAS) has been contracted by Iridium to design and develop the Iridium NEXT satellites. TAS has charged Orbital Sciences with the Iridium satellite assembly, including integration of the Aireon payload. The facility in Phoenix, Ariz., is a state of the art cleanroom with one of a kind test and assembly methods. Between this site and the TAS sister site located in France, Orbital Sciences is able to test satellites on extreme temperature fluctuations seen in space, launch stresses, pressure, and payload capability. Assembly in the early phases is slow due to meticulous and detailed testing that assures assembly techniques produce a reliable product. End-state assembly rates are expected to produce one satellite every six days, including the multiple system tests.

The Iridium facility in Phoenix focuses a great deal on the testing and monitoring of their Iridium satellite communications network. The new layer for Iridium NEXT is the hosted ADS‐B payload. Similar to Orbital Sciences, the facility has state of the art test capability. On site, they test the current in‐orbit Iridium network satellite system as well as the Iridium NEXT satellite system. Among other tests, injected data is streamed to the on‐site satellite, which through simulation, believes it is in orbit. Data from multiple versions of ground-based satellite phones and avionics are tested against the laboratory satellite. Interestingly, the ADS‐B receivers inside the building are sensitive enough to pick up overhead air traffic through the roof inside the building. Transmissions from in-orbit satellites can be sent to multiple ground antenna farms located in Phoenix, Alaska, Canada, and Norway. Once received, satellite data is sent to the on‐site Hosted Payload Operations Center (HPOC), one of two in the U.S. From there, data goes to the Service Delivery Point (SDP) for the subscribing Air Navigation Service Provider (ANSP). U.S. ANSPs and the FAA use similar SDPs for terrestrial based ADS‐B.

Space‐X in Los Angeles is an amazing facility capable of both mission control and manufacturing. Filling a cavernous floor space, the manufacturing line is capable of producing all parts needed for the Space‐X Falcon 9 rocket system. From the motors, to the rocket body, to the capsules, to the landing system — all parts are manufactured on-site. Even unique parts can be crafted on-site using a 3D alloy printer. Space‐X also manufactures the Dragon capsule, which has been used to repeatedly ferry supplies to the International Space Station. Plans are in the works to use the Dragon capsule to transport personnel as well. The assembled rocket is transported to launch sites from the Los Angeles facility. The Dragon capsule is currently operating out of Vandenberg, Calif., and Cape Canaveral, Fla., but additional launch sites are planned for the Kennedy Space Center and South Texas Spaceport.

The Space‐X launch system is designed to place a payload into orbit with enough fuel remaining to fly the reusable rocket booster back for landing, which the rocket has successfully demonstrated through a system of gimbaled rocket motors, hypersonic fins, and landing gear. Space‐X continues trials for landing on a barge at sea, but that has proven challenging.

Multiple ANSPs have now signed up for Aireon Space-Based ADS‐B subscription services including the U.S., but unlike other ANSPs, the U.S. currently plans to implement changes for oceanic airspace in two phases:

The first phase, Ingest & Process, targets an Initial Operating Capability (IOC) at New York Center (ZNY) by November 2018. During Phase 1 use of Space-Based ADS‐B, surveillance will only be used to enhance search and rescue operations, situational awareness, and compliance monitoring. Space-Based ADS‐B will not be used as a sole source supporting any separation standard during Phase 1. This introduces a number of challenges from the perspective of our Advanced Technologies & Oceanic Procedures (ATOP) controllers.

Part of the development of ROS in Phase 2 is to first decide which technology will support a reduced separation standard. The Agency must select between Space-Based ADS‐B and ADS‐C (Automatic Dependent Surveillance-Contract). Though Space-Based ADS‐B is likely to be selected, it is not a given. This puts the U.S. use of Space-Based ADS‐B for ROS behind other ANSPs that have already committed to this path. The pressure is on for the U.S. to decide which path they will take to avoid becoming a bottleneck compared to surrounding ANSPs.

NATCA supports the continued development and implementation of Space-Based ADS‐B and foresees a paradigm shift in operations in the near 2020 working environment.