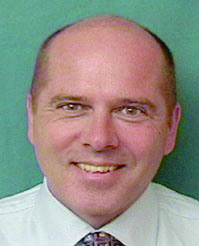 The pilot of the Velocity – tail number and call sign N129VA – who took to the skies above Northern Virginia after taking off from Manassas Regional Airport on July 5 last year probably is still quite thankful for his good fortune that afternoon. He received some of the very best personal care and safety service that a NATCA member can provide, courtesy of veteran Potomac TRACON (PCT) controller Louis Ridley.

Ridley, in addition to being a 22-year veteran controller who has been at PCT since 2004, is also an accomplished and highly skilled pilot as well as a flight instructor. “I grew up on an airport in upstate New York,” says Ridley. “My father taught me to fly before I could drive a car.” During Ridley’s first FAA assignment, at Columbia, S.C., TRACON, he started and ran his own pilot service business with 11 employees and also became involved in the airshow industry, with extensive experience at both Sun-N-Fun and Oshkosh until 2005.

So on this particular afternoon, Ridley proactively came to the aid of this pilot armed with an array of skills and talents and, above all, an extraordinary level of care and sense for what a pilot needs at a particularly challenging moment. Ridley keenly spotted this Velocity pilot, whom he knew just by interpreting the information on his radar scope was trying to land at Shenandoah Valley Regional Airport but was unable to do so because of an overcast layer. Ridley then dialed up the SHD Unicom frequency and listened for any aircraft talking. As soon as he could confirm a call sign, he reached out to the pilot to offer assistance.

Ridley: Velocity one two nine victor alpha, Potomac. You on the radio?

Ridley: Alright, do you require any assistance at this time?

Ridley: Okay, you’re not IFR capable or equipped at this time?

N129VA: That is correct. The pilot is not IFR capable.

Ridley then set to work to find a way down for the pilot. He discovered the aircraft had 45 minutes of fuel remaining and then, using his calm demeanor, reassured the pilot that he could get to an airport with acceptable weather conditions for a safe landing. He went the extra mile, using his own experience in the cockpit, to ask the pilot about his navigation and terrain-awareness equipment. Number one, it would help Ridley know what the aircraft was capable of. Number two, it might offer a measure of reassurance to the pilot to know he would be okay, keeping the mood light during this serious situation.

Ridley: I can sure talk you through an ILS if you’d like, or take you over to Culpepper where the land is flatter and take you in on a localizer approach, whatever you would like to do. I am a CF-Double I (CFII), I have six thousand hours, talked for over twelve hundred. I think I can talk you down if you want to do that.

The pilot said he was comfortable with going into Culpepper, so Ridley gave him a heading and pulled up the approach plate. He also recommended that the pilot utilize the autopilot and altitude hold functions. He also formally declared an emergency for the pilot and assigned him an altitude of 7,000. Soon, the aircraft would join the localizer and Ridley would track it to the airfield.

Then, Ridley made an amazing offer of assistance.

Ridley: November nine victor alpha. When you get to Culpepper, the airfield will be closed. I’m sure there’ll be some people around. If not, I’m based there with my airplane. I’ll send my wife down to make sure you get into a hangar and get some transportation so you don’t have to worry about any of that.

Soon after, the pilot was out of the clouds and on his way to a safe landing.

From Ridley, one final reassuring transmission:

Ridley: Nine victor alpha, radar service terminated. Go on over to Unicom, land, have yourself a nice cool drink.