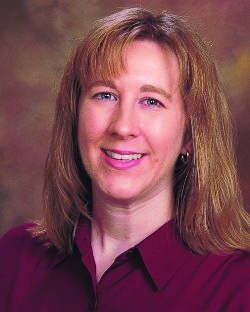 It was the first of the year and bad weather was moving in as 14-year veteran Kristin Danninger worked the radar approach position at Madison. A couple of VFR flights had already returned to MSN due to decreasing visibility when N6085M called in distress – a novice pilot stuck in the clouds near Baraboo Dells Airport.

Knowing that a Cessna aircraft had flown VFR into Portage Airport a little while before, Danninger suggested the aircraft head eastbound.

“I still have zero visibility at two thousand seven hundred,” responded the pilot after descending a bit in hopes of catching a glimpse of Portage. “It’s not gonna happen.”

“I would just suggest you continue eastbound then,” advised Danninger in her comforting Midwest accent. “Hopefully the conditions will improve.”

With the aircraft now headed towards MSN, where conditions were still VFR, Danninger went ahead and asked the necessary questions in order to assist the disoriented aircraft, learning that the pilot not only had zero instrument training, but had just received his pilot’s license the day before.

Danninger calmly made several suggestions in order to get the now panicking pilot safely back on course and consistently above minimum altitude, making certain to clarify the aircraft’s intentions throughout the situation to ensure that both remained on the same page.

A few minutes later, the pilot received ground contact and Danninger successfully used her geographical knowledge of the area to point out the interstate highway below that led to the airport – a sight that brought tears to the eyes of the pilot. With the runway and approach lights set on high, Danninger oriented him for the best runway and ensured he was comfortable before transferring him to the tower.

The tears were proof enough of the emotional situation that took place on Jan. 1, 2009, as the pilot realized the seriousness of the situation and the fact that it could have so easily ended in tragedy. During what started out as a routine day for Danninger quickly turned complex due to this series of unforeseeable events; however, the end result was a safe and successful one thanks to her calm, patient and professional demeanor throughout the entire 20 minutes, as well as her undeniable knowledge of the area that enabled her to perform her job to the very best of her ability.

The next day the pilot and his girlfriend drove back from Illinois to personally thank Danninger for her help – an act of kindness that showed the appreciation this controller undoubtedly deserved, though in no way expected for something she would describe as simply her “job.”