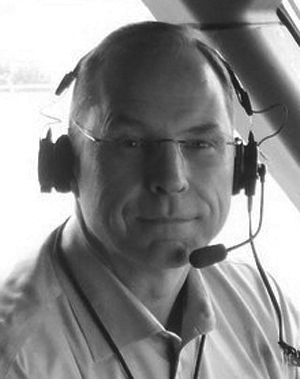 NATCA member Mark Anderson has been a test pilot for 25 years, working for the FAA for 20. So, when asked several years ago if he’d be interested in helping out with the Boeing 787 certification program, this Aircraft Certification member of Region X, of course, said yes.

So far, Anderson has acted as a 787 guest test pilot for about five or six flights, but on Nov. 9, 2010, he came across his biggest test yet.

Things started going poorly at about at 1,000 feet above the ground as Anderson came up on the end stretch of his six and a half-hour test flight. He was flying the airplane manually through the head-up display when the display suddenly went dark. Moments later, the auto-brake clicked, and the first call declaring smoke in the cabin followed. Then, with the call of fire at 500 feet, about 30 or so Engine Indicating and Crew Alerting System (EICAS) warning, caution, and advisory messages started rapidly displaying. All four engine-driven generators dropped off the line and attempts to start the auxiliary power unit failed. “At best,” Anderson recalled, “we thought we had partial electrical power, but maybe as little as an aircraft battery and the ram air turbine, which provides emergency back-up electrical power.”

Anytime you have a smoke or fire event in an airplane such as this, it is known across the industry that rule one is to get on the ground as quickly and safely as you can. And this is exactly what Anderson did. With smoke now building up in the cabin, the crew elected to land the airplane and do an emergency evacuation on the runway. Fortunately, the airplane was flying fine despite the situation on board; the wheels were down, the flaps out, and the throttles responsive as Anderson used visual references outside his window to descend the aircraft.

As the crew took part in a successful slide evacuation upon landing, Anderson took a moment to look in from where the flight deck door would have been, only to see 10 feet into the cabin due to the thick electrical smoke that lingered. After much assessment by the fire department, it was determined that the fire had gone out as soon as the engine-driven generators had tripped off the line in protection of this short-circuit condition, thus leaving merely the white, acrid-smelling smoke behind.

Looking back on this event, Anderson credited the day’s safe response to that of professional training. “It lessens the initial shock of a situation and provides a sense of familiarity so a pilot knows how to react,” he testified. “When a situation such as this does go poorly, training provides the experiential base to draw from to bring the situation to a safe conclusion.”

Anderson is one of 31 flight test pilots who are involved in the review of new engineering certification programs occurring daily around our nation. These certification reviews are essential in establishing a level of safety so that no one in the flying public is harmed.

“This is not accomplished by taking risks or without the review of data; it is done by testing, analysis, technical debate, and clear adherence to all applicable safety regulations,” said NATCA AIR National Rep Tomaso DiPaolo.

As part of Region X, the Aircraft Certification bargaining unit is composed of aircraft certification engineers, technical and administrative safety personnel, and flight test pilots. NATCA couldn’t be prouder to recognize this region, a first for the Archie League program, alongside our fellow Air Traffic Control bargaining members, as it is equally qualified in showing a member’s dedication and professionalism among extreme circumstances.

Continued DiPaulo: “Today, aviation safety is the safest mode of travel because of the good work Mark and the other folks do in Aircraft Certification. Mark’s professionalism and adherence to safety being our number one priority resulted in an incredible real-time save of all those aboard an experimental Boeing 787 test flight. It has been my honor to know and have worked with Mark these past years.”

“NATCA represents other aviation safety professionals, in addition to air traffic controllers. These safety professionals are my brothers and sisters in the federal work force. They work daily in the cubical world to prevent future aviation accidents and any further loss of life. However, before an aircraft is allowed to be flown by the public, it is tested and flown experimentally. Our NATCA-represented flight test pilots and engineers for Aircraft Certification step on board these aircraft to determine and push the boundaries of safety. In the case of the Boeing 787 test flight, our own Mark Anderson had to take that even a step further and demonstrate that our safety professionals can also maintain safety in an emergency situation with an unknown aircraft failure. His actions saved all those aboard and demonstrated safety procedures that will ensure the safety of the future flying public.”