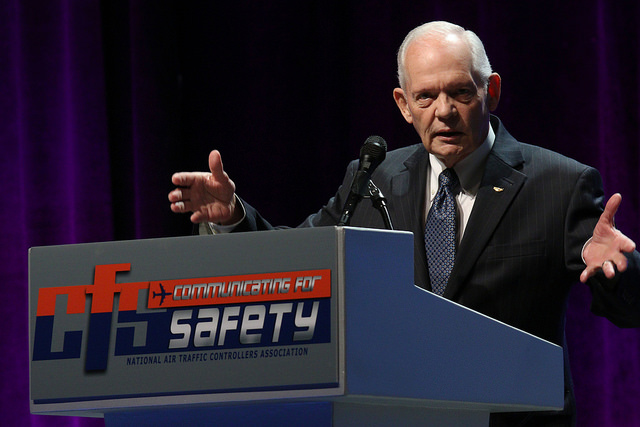 “In my humble opinion, there are three things critical to success: discipline, motivation, and having a goal,” Dr. Jerry Cockrell, Ph.D., said during his remarks on the opening day of Communicating For Safety 2016.

He described these goals as being attainable through self-motivation. He used the example of his lofty goal from his piloting days: to have zero defects in every single flight he handled.

“There’s always some anomaly that causes you to have to change your goal,” he explained. “It may never be absolute perfection, but as close as I can get it, I want zero defects. If your goal isn’t zero defects, then you will condone mediocrity in performance.”

This high standard of self evident throughout Dr. Cockrell’s distinguished career as an aviator and psychologist. As a former Boeing 737 captain, Dr. Cockrell has logged over 20,000 flying hours, including flying a Boeing 747-400 on international routes for an air carrier. He also holds a Ph.D. in Psychology and Education. He began working in 1977 and was one of the earliest developers of Crew Resource Management (CRM) programs.

Dr. Cockrell has been on the forefront of current teamwork programs, leading the way with his unique CRM, human factor, and teamwork programs that have inspired others to follow in his path. Through these programs, Dr. Cockrell has worked with corporate, governmental, and aviation groups including Mobil Oil, ARCO, all branches of the military, the U.S. Coast Guard, and the Federal Bureau of Investigation.

Through his extensive experience, Dr. Cockrell warned all in attendance about the biggest problem he sees in people — developing an ego. He explained that it “will get in your way,” when trying to accomplish your goals. He recounted several problems it caused for airlines years ago because many men and women who served as single-seat, single-engine pilots in the military were used to doing everything themselves, but then became immersed in a team environment.

“It was a struggle to get (those egos) straightened out, which is why we started the CRM thing,” he explained.

Dr. Cockrell continued that he has been able to accomplish so much, and that all air traffic controllers can accomplish just as much, if they are disciplined and motivated enough to hold themselves and their goals to the highest standard.

As MarkAir’s director of safety and training, Cockrell has worked with its employees, including mechanics, pilots, and flight attendants. His Maintenance Management Safety seminars led the way before government NPRM (Notice of Proposed Rule Making) for CRM, and he is a respected aviation human factors authority, giving him a unique perspective on what motivates people to do their best.

He said that fear of failure is much less motivating to accomplishing goals than receiving compliments. These human factors are incredibly important in a pilot or professional who is disciplined, motivated, and able to meet their goals.

Cockrell was one of the first speakers to make aviation safety presentations in all 50 states and abroad — speaking in England, Germany, Nigeria, Saudi Arabia, Zimbabwe, Mexico, Canada, and Australia. He’s delivered over 3,000 humorous safety presentations.