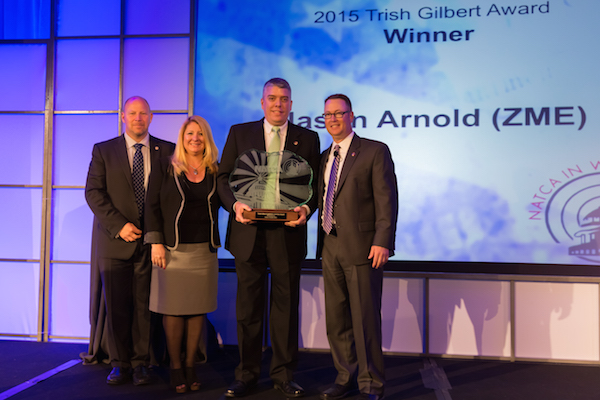 Southern Region Legislative Representative Jason Arnold (Memphis Center, ZME) was honored with the 2015 Trish Gilbert Legislative Activism Award at NATCA in Washington (NiW) on May 18, 2015 for his career-long work serving the Union through extraordinary and influential efforts.

The award honors great activism and the tremendous amount of hard work, time, and dedication upon which it is built. The award presentation is an annual tradition at NiW starting in early 2009 when it was called the National Legislative Activism Award. The NLC renamed the award after Gilbert following her election later in 2009 as Executive Vice President. She had previously chaired the NLC and also served as Southwest Region Legislative Representative.

“There are few things that Jason Arnold can’t do,” NLC Chairman Steve Weidner said, citing the creation of the NiW website, an array of online legislative forms and materials, and regular legislative updates as a few examples of his many important contributions. “All of these things need to be done to further our efforts and make us successful legislatively. Jason shows passion, dedication, and above all, an overall commitment to this organization. There is not a member in this Union he would not help to set up a visit or a Congressional tour of a facility.

“No matter the task, Jason anticipates what needs to be done before it is needed.”

“This is very humbling,” Arnold said, recalling watching the NFL awards ceremony a few months ago as Arizona Cardinals Coach Bruce Arians accepted the coach of the year award. “He said this was not an award for him, he just coached the team. I would not be up here today if not for all of you who inspire me on a daily basis. Back home, the controllers are working the boards so I can be here today. Over there on the table is Jim Davoli (also of ZME). I would not be here if not for him.”

Arnold also thanked his brothers and sisters from the Southern Region and the entire NLC.

“I have never been closer to a group of individuals in this organization than this Legislative Committee.”

In closing, Arnold thanked his wife, Paula, for “putting up with my work at all hours of the day.”