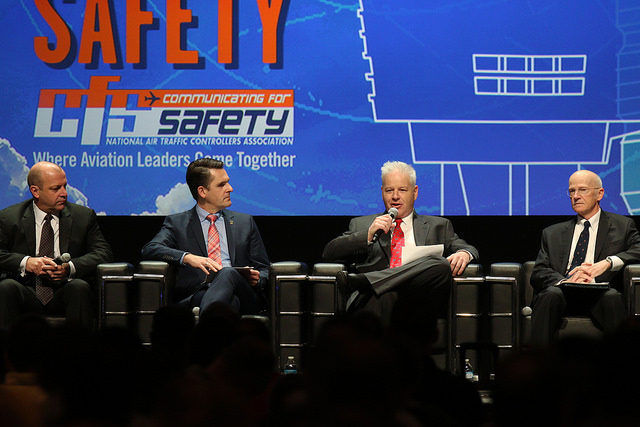 Overview:
Remote Tower Systems technology holds great potential for the future of the National Airspace System (NAS). During this discussion at CFS, panelists explored the appropriate testing and development necessary to ensure its safe integration into the NAS, giving attendees a balanced look at one of air traffic control’s newest technologies.

“We don’t like change for change’s sake,” said Hickey, whose statement was met by loud applause from fellow controllers in the audience. “First, prove it is better and at least as safe as (what) we currently have. That is why it is so good to have NATCA involved.”

NATCA is a collaborative participant in the current testing and development of a Remote Tower System at Leesburg, Va., near Washington Dulles Airport, in Class B airspace. First stage testing at Leesburg included passive monitoring during a four-month phase that ended in November 2015. System developer Saab-Sensis presented the data to the FAA for approval in order to move on to the next phase, which will include active controlling.

McCrea said the goals of Remote Towers are greater safety margins for Visual Flight Rules traffic and reduced arrival and departure delays for Instrument Flight Rules traffic. “What we ultimately want to do is show this technology can be transferred into the NAS,” he said.

NATCA views remote tower systems as cutting-edge technology that gives the U.S. aviation industry the ability to expand air traffic control services where they are not currently provided, and provide a better margin of safety at non-towered airports.

NATCA sees versatility in Remote Tower technology. For example, in radar rooms, this technology could be used to provide a picture for controllers working approach so they can see aircraft they’ve cleared for an instrument approach to a non-towered airport actually touch down and turn off the runway. This will help controllers provide quicker and more efficient direction to other aircraft on approach.

The technology was successfully installed at an airport in Sweden, but as Heflin rightly pointed out, there are important differences between Sweden and U.S. air traffic.

“They have a couple thousand ops in Sweden and most are scheduled,” he said. “The majority of aircraft are quite larger. Leesburg is Cherokees and Cessnas. That makes a big difference. But NATCA is honored to be involved in the testing. We want to help ensure integrity in the NAS. We believe Remote Towers can augment air traffic services.”

Hickey discussed how a Remote Tower trial failed in Alice Springs, Australia. Bandwidth and staffing shortages were the main issues of concern. This failure has shaped his measured approach to the technology.

“We have to find out if it really makes it safer,” Hickey said. “We need to be quite clear what level of service it actually is that we are providing.”

Peters sounded a tone of both optimism and caution in his discussion of the technology as it develops.

“Ten years ago, we were laughing at this but what we see today is superb. The movement to infrared cameras is what I found highly interesting,” he said. He added, however, “Economic must not be the driver on this. It must be safe.”