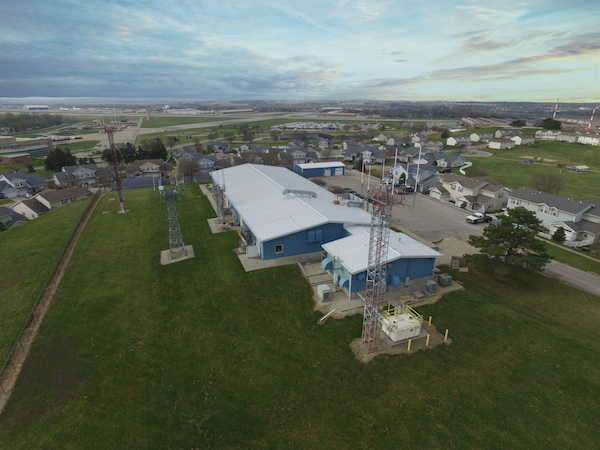 There are 19 NATCA members (of 21 total controllers) that call Omaha TRACON (R90) home. The facility was commissioned on Oct. 1, 1965, and is a level 8 that uses three different radar sources, which are fused into the Standard Terminal Automation Replacement System (STARS) display. FAA and NATCA expect to install STARS Elite next spring.

“Most of our Omaha and Lincoln itinerant traffic is made up of regional jets and Boeing 737s,” explains FacRep Daniel Witt. “Offutt Air Force Base is home of the 55th Wing, which is mostly comprised of Heavy C135s, E-4, and E-6 aircraft. Offutt is also the location of the U.S. Strategic Command (USSTRATCOM) and generates steady, random military traffic.”

Omaha TRACON air traffic is unique because there are a wide variety of things that happen every day in each sector. It is not uncommon for a controller working an Omaha sector to guide multiple pilots flying Instrument Flight Rules (IFR) practice approaches along with tower Visual Flight Rules (VFR) pattern traffic at Offutt Air Force Base, and several itinerant Omaha jet arrivals and departures mixing with pilots practicing VFR approaches.

In conjunction with the two primary airports, there are usually a wide array of operations, both IFR and VFR, going on at any one of the satellite airports that R90 services. To make matters even more challenging and complex, there is a glider club that operates out of a satellite airport, which sits about 12 miles northwest of OMA. When glider operations are active, air traffic controllers must take extra precautions to guide arrivals and departures around or above that airport to ensure a safe operation.

“With a couple of satellite airports operating parachute jumping services, we frequently ensure those aircraft and jumpers involved are not infringed upon by other aircraft, while also monitoring aircraft who are maneuvering in any of the multiple designated practice areas scattered around the perimeter of the two overlapping Class C airspaces,” Witt explains.

He continues, “Since R90 absorbed the approach control function of Lincoln tower back in 2008, we now have another sector that is always worked separate and is a little different than the layout of the Omaha side.”

Witt says the sector added a third ‘primary’ airport with a corresponding Class C airspace, as well as six additional satellite airports. He says the sector’s airspace is a bit smaller, which becomes challenging when mixing props and jets to the same runway.

The event that effects R90’s air traffic the most is the Berkshire Hathaway Annual Shareholders Meeting, hosted in Omaha by famous billionaire and Omaha resident Warren Buffett. For one weekend every spring (this year’s event was held April 30) R90 is one of the busiest facilities in the nation. Private jets begin streaming in on Thursday and continue through Sunday. Since ramp parking space at Omaha quickly fills up (and every other available piece of concrete or even grass), controllers work the jets in to drop people off, right back out to park somewhere else, and then back in again to pick their clients up and then back out again at the end of the weekend.

Additionally, Omaha hosts the eight-team, two-week-long NCAA College World Series every June. “We get ESPN and loads of baseball fans from all over the country,” Witt says. When teams arrive, and after they’re eliminated, Witt says you can see streams of planes on the traffic display between Omaha and the teams’ home states.

Lincoln is the home of the University of Nebraska Cornhuskers and football game day traffic is a pretty big deal at R90 each fall. Controllers see an uptick in traffic with fans from all over the Midwest flying in, along with the traffic from whichever rival school is on the docket. Game day also involves traffic helicopters, banner towers, aerial photographers, coordinating special stadium fly-overs, parachute drops, etc.

“This year, we are fortunate enough to have two large air shows,” Witt adds. “In May, Lincoln will have their big show featuring the Navy Blue Angels. In July, Offutt Air Force Base will host their Anniversary Open House and celebrate with the United States Air Force Thunderbirds.”

Every four years, Omaha is also a part of the presidential election. Omaha is the primary airport for most of western Iowa and all of the candidates and news media move in for the Iowa Caucus. In past re-election campaigns, controllers have gotten an above average share of Air Force One, Air Force Two, VIP temporary flight restrictions, and have been fortunate to work alongside the Secret Service to ensure the safety of their guests.

Bird migration is also a very real event that happens twice every year and lasts weeks each time. By being along a major north/south waterway, it is not uncommon to see hundreds of thousands of geese, tens of thousands of ducks, and over 20 other species in large flock sizes transitioning through during migration season. The approach control will occasionally suffer radar reduction due to the system trying to track so many birds.

“It is sort of tough to get members together since we only have 10-to-12 members off work at any given time, but we do manage to get together frequently,” R90 member Jay Dilts says.

Dilts says Witt tries to arrange something fun for the membership at least a couple of times a year.

R90 also hosts open houses and parties during each Offutt Air Show since controllers have premium views from their perch on the hill above.

Dilts touted Witt’s great job with outreach to adjacent facilities to facilitate and build relationships among members are both facilities.

“It has drastically improved the relations between us and those facilities, torn down some walls from previous generations, and also really expanded dialog and fostered a better overall environment between us all,” Dilts says.

“These events have taken it from a feeling of us/them to now feeling more like we have teammates at the towers we can ask questions of and learn and improve with,” he explains.

The atmosphere at R90 is very relaxed and is conducive to the new direction the FAA is headed — a more collaborative environment. Members who want to get involved in NATCA now have multiple opportunities to take ownership of their local. In fact, this spotlight about about R90 has included contributions from several local members, including Dilts, Mike Erlbacher, Billie Haynes, and Travis Arnold.

Erlbacher says NATCA has a strong presence and strong union leadership in the facility, which helps ensure a quality working environment for all employees.

“Members receive 100 percent from all local officers who personally ensure members are protected and informed as to what is going on locally, regionally, or nationally,” he explains.

Witt says what he most enjoys in his role as FacRep is being a part of the change taking place in the facility.

“Before being elected, I was told by a member who has been around far longer than I that, ‘I lived in a utopia if I thought members had any say in how the local union was ran,’” he says. “That was not an acceptable response for me and as it turned out, a majority of the facility agreed with me.”