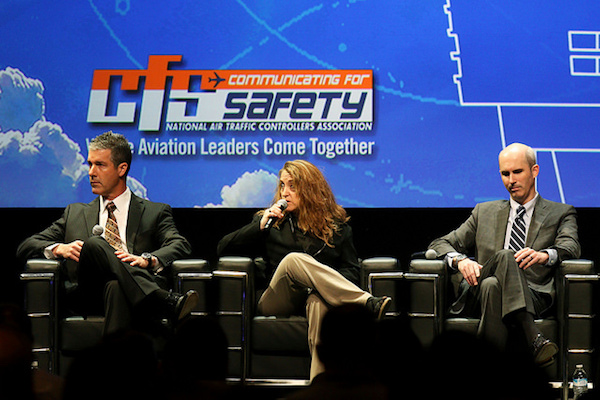 Overview:
One of the most entertaining, engaging, and informative discussions each year at Communicating For Safety is the panel that is at the heart of the mission and purpose of NATCA’s annual event – analyzing pilot/controller communications, addressing the challenges that arise, and taking steps to improve communication with safety as the guiding principle.

Marosvari set the tone early in the panel stating, “Everything we do as controllers requires effective communications.”

Sandland added that a big part of effective communications is standard phraseology.

“Keep it short,” she said. “Standard phraseology is so important. With (general aviation) communications, that’s even more critical. But it takes modeling it. As controllers, we need to model that standard phraseology.”

The panel addressed a wide array of topics, including weather, airspace issues, and procedures. The discussion also presented an in-depth perspective from pilots, including their view of controllers, and gave them an opportunity to pose questions to the largest gathering of controllers in one room in 2016.

A controller in the audience raised a serious issue during discussion: dropped call signs. While addressing the panel, the controller said, “I don’t want to be that guy,” that continually has to remind pilots to use their call signs during transmissions. As a veteran pilot, Drexler was adamant in his response.

“I want all of you to be that guy,” he said. “Enforce appropriate phraseology. Make them do it. We need it.”

Moderator Marosvari reinforced that message, saying, “Controllers need to hear that call sign with each and every clearance.”

A common theme of the panel was concise, effective, and clear communications during critical phases of flight. Panelists Peschio and Callen joined Drexler in providing good insight from the flight deck perspective.

“The bottom line is it really has to do with economy of speech in terms of getting what you want from us,” Drexler said. “We are busy ensuring the aircraft is properly configured, and we have multi-channel operations going on at that point (in critical phase of flight). If we get a long clearance, most pilots know what to expect. They will focus on the numbers. But again, especially in the terminal environment, it’s busy for you, and it’s busy for us. We need to keep it simple, quick and concise.”

“It all comes down to communication,” Peschio added. “Plain English works. Without you knowing that, there’s no way for you to help us. We’re all in agreement there.”

The panel also included several video presentations featuring pilots who spoke with NATCA about their views on effective communications. Several pilots noted the value of visiting their local air traffic control facility. Similarly, pilots and controllers in the audience who addressed the panel and the crowd stated how much they wished the Flight Deck Training program could be revamped and improved to facilitate better communicating.